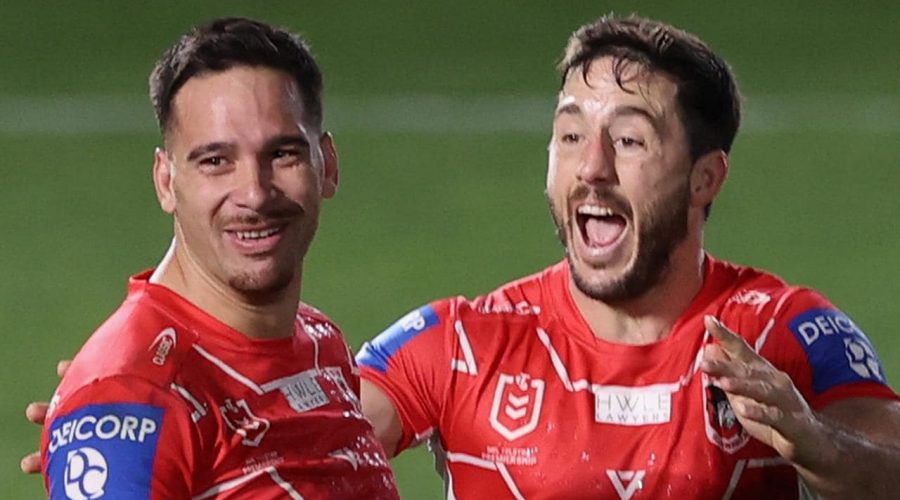 Norman had a poor night with the boot up to that point, landing just one from five attempts at goal.

One of his misses included a sideline conversion that hit the right upright after the siren, robbing the Dragons of a win in normal time.

The off-contract Norman left it late — the 89th minute to be exact — to make amends but did so in style, sealing a vital win with a sweetly-timed field goal from close range.

But he still couldn’t let go of the fact the match should have been done and dusted earlier.

“I was going into that (conversion after the siren) confident. I was telling the boys I was going to get it and then when it hit the post I was bit off it,” he said.

“Against the Sharks (in round 11) I missed it (a golden point field goal) and it was a bit disappointing. I didn’t want to let this one get away as well.

“I can obviously seal those games earlier, so when I did hit it (the winning field goal), I apologised to the boys and said, ‘Sorry about that’.”

It remains to be seen whether Norman will land a contract for 2022. Picture: NRL PhotosSource:The Daily Telegraph

Dragons coach Anthony Griffin didn’t care how his side won the game but was just glad they did.

“The last 15 minutes was fantastic and that’s all I’m worried about at the moment,” he said.

“The fact they didn’t give up and kept coming was a good sign.

“We could have given that game away and thought it wasn’t our night.

“They were tiring a bit and looking at the scoreboard and eventually we got there.”

The Warriors led 18-6 before collapsing in a heap to allow the Dragons to claw their way back and force the game into extra-time before striking the fatal blow via Norman’s boot.

It was rinse and repeat for Warriors coach Nathan Brown, who has his side throw away winnable games on too many occasions.

He said: “It’s not the first time it’s happened and it’s not a fluke it keeps happening.

“It should never (have got to that stage).

“All our best players in the back 10 minutes had crucial errors. We’re just not quite good enough to deal with that at this stage.”

Brown expects to be without new halfback Chad Townsend for next week’s clash against Cronulla after the former Shark damaged his shoulder early in his return to Warriors colours.

St George Illawarra forward Jack de Belin was placed on report twice – one for a cannonball tackle and the other a lifting tackle.

July 3, 2021 Rugby League Comments Off on Why field goal hero had to apologise
NFL News