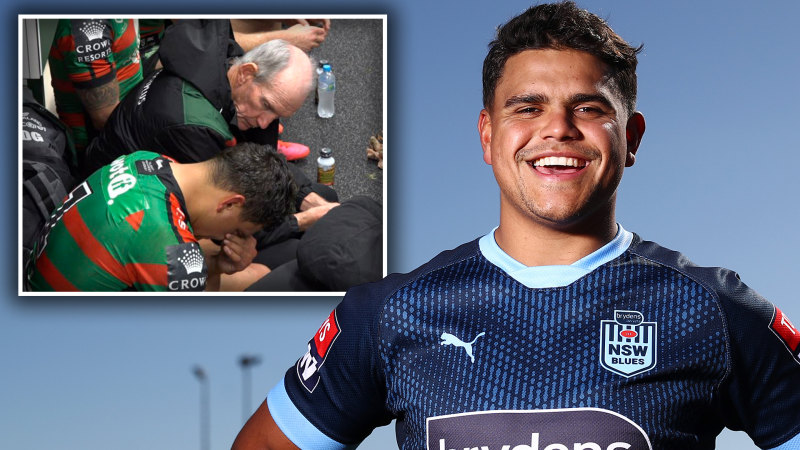 Before Latrell Mitchell blew Queensland to bits in Townsville, the Maroons’ greatest ever coach rang. 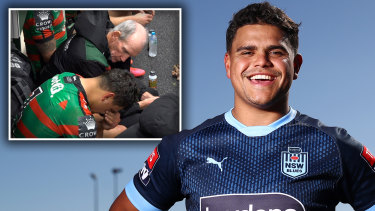 Wayne Bennett and Latrell Mitchell in the Souths sheds (inset) and Mitchell at Blues camp this week.Credit:Getty, Screengrab

Bennett promptly rubbed NSW’s noses in it on a raucous November night in the series decider – before walking away from the job. It was as good an Origin coaching performance as you will see.

This year, he’s the man who might just be bringing them undone.

Clearly, Mitchell wants to keep the exact contents of their conversation before he scored two tries in Townsville between themselves.

What did he say after the game? 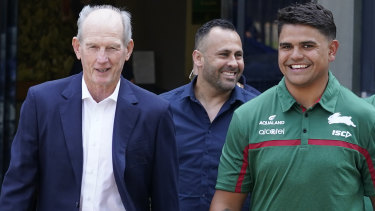 Wayne Bennett has been good for Latrell Mitchell.Credit:Getty

“Nothing,” Mitchell smiles. “He’s a Queenslander, so he can’t say too much.”

But it’s what the odd couple talk about away from rugby league which partly explains why the smile and swagger is back for Mitchell.

It’s about as odd couple as you could find. Bennett is a former police officer and rugby league lifer, who still wants to coach well into his 70s after his South Sydney deal expires at the end of the year. Mitchell has previously said he wants to retire to his regional property by 30, and his relationship with police extends to complaints about racist social media trolls.

“I guess me and him are alike,” Mitchell says. “He runs his own farm and that’s how we connected straight away. 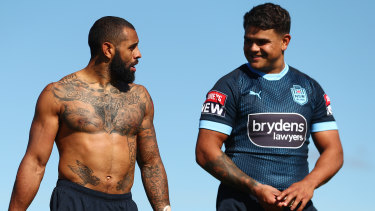 “The influence he has on people is unbelievable. It’s not even about footy, it’s more about things away from footy. He has a big impact on people because of his life experiences. He’s lived a lot longer than most with his work with the Police Force and what he has achieved in his life.

“I get to see it week in week out for the last 18 months and I know what type of person he is now. It’s an awesome relationship we have – and I get to share it with the best coach from the NRL.”

On occasions, Bennett will jump in his car and drive up the Pacific Highway to Mitchell’s family property near Taree. What it does for a 24-year-old man taking on the role of leader in the Indigenous community, maybe only he knows. But it is there to see, at least for the league-loving public, every time he steps on the field.

Were it not for the hype about Tom Trbojevic’s form, Mitchell running amok at Suncorp Stadium, the ground he played his last Origin match in 2019 before a messy axing, would be the story of the series.

Like Bennett, Brad Fittler has given Mitchell a cuddle this series. He has no appetite to revisit his past with Mitchell and the feeling is reciprocated.

But after the Blues’ game one win, Mitchell ducked a few metres away from his family in the dressing sheds to conduct another round of interviews. Without any real prodding, he spoke of his desire to make people proud of NSW again. In it, he spoke of hope for the state and his shame people live in NSW and still support Queensland.

It was exactly the type of sermon you could imagine coming from Fittler.

On Tuesday, Mitchell backed it up: “It’s great to be a part of it. I love the team, I love being around it and the boys.”

Even for a Queenslander, it would have almost brought a smile to the face of Bennett.

July 3, 2021 Rugby League Comments Off on Why Bennett’s influence on Mitchell could be the undoing of Queensland
NFL News