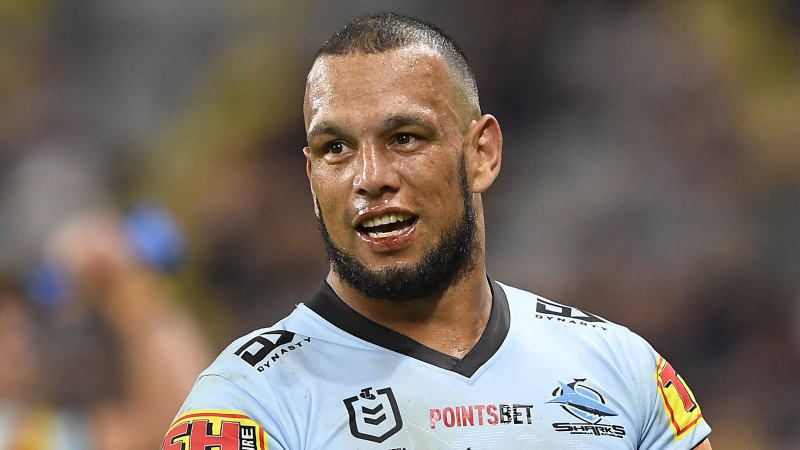 It’s the 24-hour rugby league road trip, fuelled by little more than a chicken and salad wrap and coffee, that sums up the career of Will Chambers and the strangest time in rugby league history.

On Thursday night Chambers left his newborn baby, two small children and wife in Melbourne to embark on a mad dash to beat that city’s lockdown and try to save his league career. “I had to drive to keep my career alive,” he said.

Chambers breached the Sharks’ bubble by travelling to Melbourne on a commercial flight to be at the birth of his child.

“I made a mistake and I cost myself football time, which I can’t get back,” he said. “So I’ve been in level-four lockdown with my family, training with equipment that the Melbourne Storm were kind enough to leave at my home. I didn’t know what was going to happen, but I got a text from [Storm general manager of football] Frank Ponissi saying Melbourne were getting out to beat the border closures. So I had to get out as well, but I didn’t have a private jet to take me, so I just told my missus she had to get me in a hire car and I was driving to the hubs [in south-east Queensland].

“I cleared it with [NRL chief executive] Andrew Abdo and the NRL and hit the road – from Melbourne to northern NSW [where he is waiting before being cleared to cross the Queensland border]. I went inland to avoid any [greater Sydney] hotspots and drank coffee and didn’t really eat. My first goal was to cross the [Victorian] border. I had to get that done [before the lockdown].

“I didn’t want my body to relax, not for a second, until I found a spot to sleep. I ended up pulling up in a truck stop at Gundagai and tossing and turning for 90 minutes. It wasn’t real comfortable in the back of the car. I got some petrol and a bite to eat and just hit the road.

“The wife was a bit upset I had to leave in such a rush, but if I stayed that might have been me done – career over. If I got a flight it would have been two more weeks of hard lockdown in Brisbane but this way, a few days in an NRL-approved area for lockdown and I hope I can enter the bubble.”

Chambers hopes to cross into Queensland on Thursday and rejoin his teammates the following Wednesday. While he is delighted he’s got the chance to extend his career, he’s not happy he was penalised so heavily for his dash home for the birth of his child. 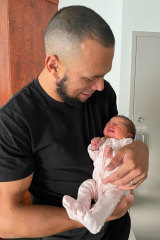 Will Chambers broke the NRL bubble to be at the birth of his child.

“When you look at it, I’m the bloke who has been hardest hit outside of Paul Vaughan [who was sacked by the Dragons after hosting a barbecue in breach of NRL COVID protocols] in terms of games out,” Chambers said. “Jai Arrow copped a fine and games [for having a woman in his hotel room in the lead-up to Origin II], but he was chauffeur-driven home and got a private jet back [to Sydney].

“Look, I’m not whinging, I made a bad call. And if someone said to me you have to drive all day and all night to play NRL as a kid when I was starting off, I would not have hesitated for a minute. And with the days maybe running out to press for a new contract, I’d do this drive all again.”

The NRL has been dealing with a range of false rumours about the night of Jai Arrow’s Origin camp bubble breach, but one development is that there were definitely two women who somehow slipped past Queensland security to spend time with him.

What can’t be proved is that staff or other players were anywhere near the women. Those interviewed by the NRL are sticking to their stories. Bumbling Queensland blazer wearers are sticking their heads in the sand.

In his confession to the NRL, the Rabbitohs forward was adamant he had no physical contact with the woman during her visit. How this happened will be the subject of an internal review by the QRL, but the NRL has no evidence to take the matter further. The women work for a company that survives on discretion, making any kind of investigation difficult.

The Arrow scandal left the Blues dismayed at how Queensland could have allowed this to happen hot on the heels of the Dragons’ COVID protocol breach. NSW officials were particularly upset after witnessing the dedication of their respected team manager, Peter Parr. 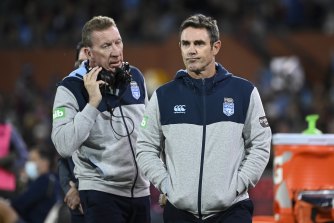 Parr’s mother, Eleanor, died as the Blues went into camp for game three. She was due to turn 87 on game day. Due to strict biosecurity rules, if he had left camp he would not have been able to return and help the team. It is why the Blues could not comprehend Arrow’s recklessness. Here was one of the Blues’ most valued officials having to grieve, deal with an emotional family and organise a funeral while others were flouting the rules.

Parr was a vital cog in the Blues machine and their series success. He was in charge of making sure the players did not have a concern, despite change after change impacting on the squad.

Those who know Parr could see he was doing it tough. He held it together for the team and kept his issues secret from the players.

“He’s been with me for four years and he’s our security blanket,” Blues coach Brad Fittler said. “No one has done more for this team. To see what he did for us in this last week in the toughest of conditions – it says it all about him.”

“When it happened we told him to go home … spend time with family,” Trodden said. “But he refused. He wanted to finish the job … he was a hero for us behind the scenes, an unsung hero.”

Parr left camp on the morning after the loss to drive to Newcastle for his mother’s funeral on Friday.

Blues back-rower Tariq Sims impressed with his passion and leadership during the Origin series. He may also make a handy recruitment officer. He was happy to tell Dale Finucane about the merits of playing for the Dragons, who are circling the Storm star.

Given the selfishness displayed by the “dirty dozen” at Paul Vaughan’s party, the Dragons could do with a character such as Finucane. It’s also significant Sims didn’t receive an invite to the Dragons’ get-together. He would have told his teammates they were doing the wrong thing and to abandon their plans.

Origin III exposed flaws in the six-again rule that have leading coaches concerned about the welfare of the game’s biggest stars.

There is a feeling the six again allows referees to make soft or weak calls; a little wave of the arm in a fast-moving match isn’t scrutinised to the same extent as a penalty. Some consider it a cop-out.

ARL Commission member Wayne Pearce will rightly tell us the rule has largely eliminated wrestling from the game, but it has introduced a new range of problems and, according to leading coaches, it is making players too tired while leaving them open to being clobbered.

Queensland coach Paul Green deserves credit for coming up with a game plan that blunted NSW’s lethal attack. Queensland were prepared to risk giving NSW set restarts whenever they were coming off their own try line by standing offside and getting up quickly to hit NSW’s back line stars as soon as they got the ball. The Maroons not only stopped the NSW attack from finding space but were able to land big hits on NSW’s key players, which limited their effectiveness for the rest of the game.

NSW were amazed that referee Gerard Sutton allowed the ploy to continue without putting anyone in the sin bin. Instead, he gave seven penalties and 13 set restarts, which angered fans and commentators, and detracted from the spectacle.

Green has developed a blueprint for other coaches to use in the NRL, particularly during the finals. It would be crazy to think other coaches didn’t take notice of what happened on Wednesday night.