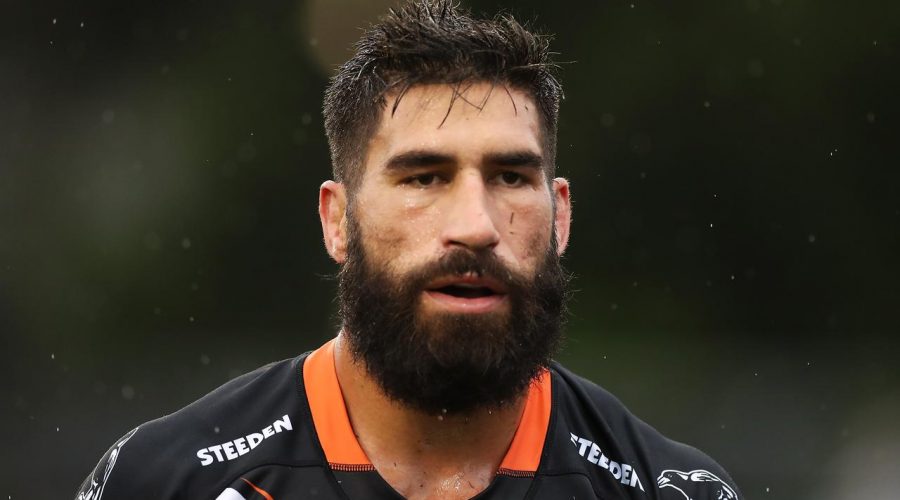 Wests Tigers captain James Tamou has brushed off/dimissed trade rumours as his side looks to make a late-season push for the finals.

The Tigers were in the running to recruit Brisbane Broncos star Tevita Pangai Junior but were dealt a major blow when it was confirmed he had instead decided to sign with the Canterbury Bulldogs on a three-year deal worth more than $2 million.

Tamou said it was disappointing to miss out on Pangai Jnr’s signature.

“I was well documented in saying how much a great signing it would be for the club and for the young club that we have and for his short time in the game,” he told news.com.au.

“He’s a bit of a game-changer Tevita Pangai Jnr and it’s unfortunate that these things happen and that if he does go to another club. He’ll definitely be valuable to whichever side he goes.

“I wish him all the best. I know he’ll do great at the Bulldogs under Trent Barrett. I can imagine he’s going to use him attacking-wise how Trent Barrett used Viliame Kikau last year so that’s a bit scary to go up against.

“But you can’t hold everything on one signing there, so I wish him all the best and if that’s the case, we’ve got to look onto something else in the recruitment drive.”

Brisbane Broncos forward Tevita Pangai Jnr has decided to sign with the Canterbury Bulldogs instead of the Tigers. Picture: NRL PhotosSource:Supplied

Tamou said his side won’t be distracted by trade rumours surrounding the team, including whispers Tigers halfback Luke Brooks has been linked to the Canberra Raiders and Cronulla Sharks.

“The way the Tigers are in the media a lot, it just shows people in the public like to keep an eye on the Tigers, that’s all,” Tamou said,

“For that to come out, we can’t really see it as a distraction because of our goals we’ve got in the next seven games coming up. We’ve obviously got some must-win games.”

“We’ll put that in the back seat, we’ll let all that happen in the background because at the moment we can’t really afford to put too much energy in things like that.”

The Tigers skipper also opened up on David Nofoaluma’s decision to stand himself down from the leadership group.

The winger — who became the Tigers’ all-time leading try scorer in Saturday’s 42-24 win over the Broncos — was too hungover to train the morning after attending the wedding of chairman Lee Hagipantelis’ daughter earlier this year.

“I was pretty impressed,” Tamou said.

“Obviously we all make mistakes and we can’t always get it right but for him to take it upon himself to address us and address the team to stand himself down from the leadership group says a lot about himself.

David Nofoaluma stood himself down from the Tigers’ leadership group after he turned up to training hungover. Picture: Brett CostelloSource:News Corp Australia

“It says a lot to the young ones coming through that we’re not really going to tolerate it.

“He knew he made a mistake and he knew he had to do these sorts of things.

“I think he got a lot more respect back for that and I think it might have been a good thing for David because the last couple of weeks he’s been playing unreal.

“Just for him to really concentrate on himself not only on the field but off the field, that can only help us.”

I think it’s really come down to that point of (it’s) nearly ‘do or die’ every game.

We’ve made it hard for ourselves to get to this point, but a good win on the weekend only helps our confidence and our belief. Tough one against Manly next up but we’ll take that old cliche we’ll take it one day at a time.

The Tigers moved to 12th on the NRL ladder after defeating the Broncos and are now only win outside the top eight.

His side will face a tough test when they play sixth-placed Manly on Saturday.

“I think it’s really come down to that point of nearly ‘do or die’ every game,” Tamou said.

“We’ve made it hard for ourselves to get to this point, but a good win on the weekend only helps our confidence and our belief.

“Tough one against Manly next up but we’ll take that old cliche, we’ll take it one day at a time.”

Tamou is in his first year at the Tigers and believes the team isn’t too different from the young Penrith Panthers side that struggled in 2019 before rising up the ladder last year.

“Believe it or not, there’s a lot of similarities between this side and the Panthers side in 2019,” he said.

James Tamou is hoping the Tigers can make a late run for the finals. Picture: NRL PhotosSource:The Daily Telegraph

“Obviously 2020 was a great year playing in the grand final and a lot of players playing out of their skin and going on to play Origin. But 2019 we weren’t that great. I don’t want to remember where we finished — 12th or 13th.

“There are a lot of similarities from this year and that year. As in, I know we’ve got the quality players that we need, it’s just about putting it all together and going forward with it.

“In 2019, we lost five or six games in a row, we got booed, and we had great quality players in that side. Again, it’s the same here at the Tigers and there’s a lot of growth.

“I can see the quality players that we have and even the young ones and the rookies coming through. It’s a very special club and I’m really looking forward to this next part of the year and next year.”

The Tigers’ turbulent season has been captured in a four-part documentary series called Wild Wests: Tales from Tiger Town, which is available to watch on Fox Sports and Kayo.

“Kayo and Fox Sports did a remarkable job,” Tamou said.

“They were very incognito about everything and we hardly even noticed them.

“For them to get that close and personal on things, I think it’s a great way and a great concept for the fans to have a look at what goes on behind the scenes.”

How to watch Wild Wests: Tales From Tigertown

All episodes will be available on FOX LEAGUE Channel 502, Fox8 & Kayo