Referee Gerard Sutton blew the full-time whistle seconds before the siren sounded at Adelaide Oval on Wednesday night to deny NSW one last chance to snatch victory in the dying moments of Origin one.

NSW captain Boyd Cordner questioned Sutton after the game as to why the Blues weren't able to continue attacking the Queensland try line following a James Tedesco play-the-ball moments before the siren. 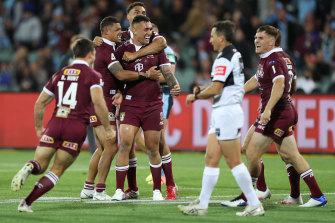 The Maroons celebrate after winning game one in Adelaide after referee Gerard Sutton blew full-time before the siren sounded.Credit:Getty

The Channel Nine broadcast clock also had two seconds remaining when Sutton blew the full-time whistle as the Blues trailed 18-14 in the closing stages.

The NRL reviewed footage of the incident immediately after the game and defended Sutton's timing.

"The referee gets a 10-second countdown from the match-day coach in their ear at the end of every half, based off the time-keeper," an NRL spokesman told the Herald. "The referee calls full-time off that, not the siren or the scoreboard timer."

The Blues were also unlucky not to receive a penalty after the Queensland defence piled on top of Tedesco and slowed the play-the-ball down enough to prohibit NSW from spreading the ball towards Josh Addo-Carr's wing on the next tackle. 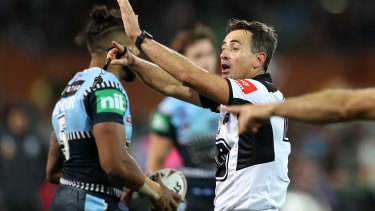 Meanwhile, the Blues were left to rue a number of uncharacteristic errors in game one, leaving them with plenty of work to do ahead of Origin II at ANZ Stadium on Wednesday.

"It gives us a chance to have a bit of an attitude adjustment and realise it's a series now and be ready to go," NSW coach Brad Fittler said.

"We'll see what character we're all made of. Last time we had to win a series in Queensland was 1994. It's a long time since we've been able to do it. We'll have to settle ourselves and find our best 17 next week at home. It's do or die now. I trust in the group. They've got great character. They know now what sort of team they're playing against."

While it's hard to deny the Wayne Bennett factor, Fittler insists the Blues were their own worst enemy.

"Everyone is aware of the ability of Wayne Bennett – he's one of the best coaches of all time," Fittler said. "But at the end of the day, we have to look at our own game and realise there are areas we could have done better. The ball is now in our court."

November 5, 2020 Rugby League Comments Off on Were NSW robbed of last-ditch chance to win Origin one?
NFL News