The Sydney Morning Herald approached all 32 of the NRL club chief executives and chairmen to take part in an anonymous poll covering the big issues in the sport, and 25 responded. In the second of a two-part series, this is how the game’s most influential figures view its burning questions on the eve of the season.

1. Do you believe the NRL should introduce a 17th team in Brisbane for the 2023 season? 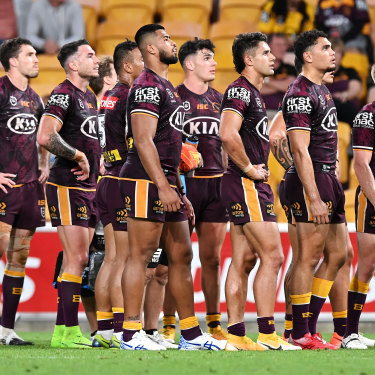 The Broncos are watching the NRL’s expansion discussions with a vested interest.Credit:Getty

The verdict: The majority of clubs are opposed to the NRL’s hopes of adding a team in Brisbane in time for the 2023 season. “The view of the clubs are very important and I gave them an undertaking that we wouldn’t do anything unless the business case stacked up,” ARLC chairman Peter V’landys said. “It has to have a return on the game and improve participation in Queensland. I gave an undertaking that I would meet with all the clubs to get their view points, then we’ll make a very informed decision.”

2. Should a 17th team pay a licence fee to join the competition?

The verdict: The clubs are adamant they want a new franchise to pay their way into the NRL, should they be given the green light to enter in 2023.

3. If you could sign any player in the NRL for this season, who would it be? 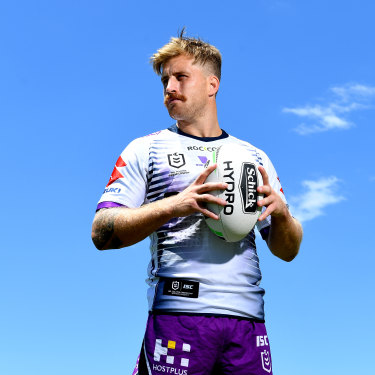 Cameron Munster is the most sought after player in the NRL.Credit:Getty Images

The verdict: Melbourne has a new big three, with Cameron Munster, Ryan Papenhuyzen and Harry Grant voted the most sought-after trio in the game. After an incredible 2020 campaign, leading Melbourne to a premiership and Queensland to a shock Origin series victory, Cameron Munster has overtaken Tom Trbojevic as the NRL’s most wanted player.

4. Do you believe the NRL should make the COVID-19 vaccine mandatory for all players and staff?

The verdict: The NRL could be forced into a situation where players are asked to take the COVID-19 vaccination if the New Zealand Warriors are to return home this year. The government isn’t making the vaccination mandatory, however it may be required for international travel. The majority of clubs believe their players should be forced to get the injection if they want to continue playing in the NRL. “We’re in the hands of government,” V’landys said. “We need to know what their view is. We also need to know the view of our expert. The decision could be taken out of our hands. It’s not just the federal government we have to satisfy, it’s the three state governments as well. We’ll wait to see what government decides and we will absolutely abide by protocols.”

5. Are you satisfied with the NRL providing the Sydney Roosters the maximum $350,000 salary cap exemption for Boyd Cordner’s concussion during State of Origin? 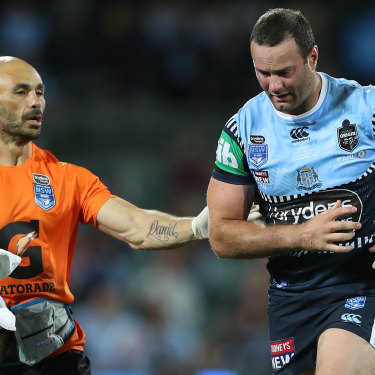 Boyd Cordner leaves the field in Adelaide after suffering a concussion.Credit:Getty

The verdict: Surprisingly, most clubs don’t have an issue with the NRL handing the Sydney Roosters $350,000 in salary cap relief to compensate for Boyd Cordner’s concussion in Origin. Cordner will miss at least the first 12 rounds of the season, with the Roosters able to use that money to buy a like-for-like replacement. “I agree with the clubs,” V’landys said. “You have to remember Boyd Cordner suffered that injury during a representative match. That’s the policy. They are entitled to a discount on the salary cap and that’s what we’ve done with Boyd Cordner. He’s been treated like any other player.”

6. How would you rate the strength of the game’s current concussion protocols?

The verdict: The NRL is in the process of forming a concussion committee to examine the game’s current protocols. It’s expected there will be an implementation of new guidelines in the next 12 months, but 88 per cent believe the NRL has got it right.

7. Should the NRL allow teams to use an 18th man for concussion?

The verdict: There’s a growing appetite for clubs to have an extra man on the bench in case they lose a player to concussion during the game. “It comes back to costs and the club as well,” V’landys said. “I’m certainly in favour of it. I think we should have an emerging player sitting as the 18th man to feel the atmosphere and be with those heroes that he probably worships. I’m not against an 18th player.”

8. Do you believe clubs are still contacting and negotiating with banned agents? 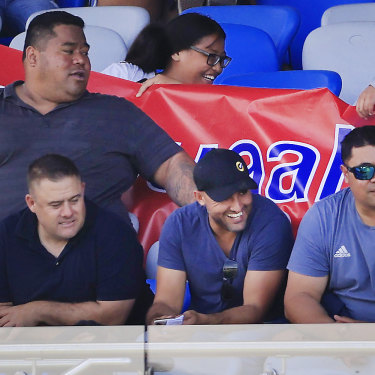 The verdict: With several agents wiped from the game in the past two years, clubs still believe there are rival teams negotiating with unaccredited managers. The majority of clubs think their rivals are doing the right thing, however 42 per cent believe there are people within the game breaking the rules.

9. Do you support the NRL’s endeavours to try and stop player agents from representing coaches?

The verdict: The NRL wants to stop agents from building little empires at clubs by stacking the roster with their clients. It’s been a problem at several clubs in recent years, with the coach’s agent bringing in players that he manages and gaining certain control of the club.

10. Should the NRL introduce a standalone State of Origin period in the middle of the season? 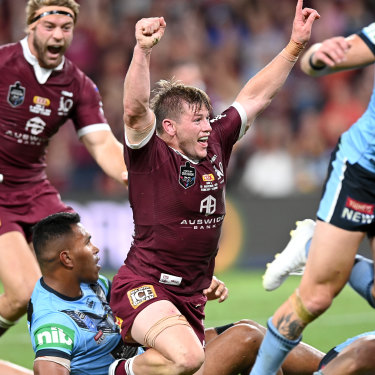 Harry Grant of the Maroons celebrates a try in Origin III.Credit:Getty Images

The verdict: While television ratings from last year’s end-of-season Origin series weren’t impressive, the NRL is still considering a mid-season stand-alone Origin period. It appears they have the support of the majority of clubs. “Mid-season stand-alone is certainly under consideration,” V’landys said. “We’d like to give the players a rest for mental reasons as well. It’s hard to go 24-25 weeks without a break. If they can get a break that’ll be a good thing.”

11. Should the national anthem be performed before State of Origin games?

The verdict: The NRL decided to scrap the anthem for last year’s Origin series, before backflipping on the decision following the backlash from prime minister Scott Morrison. The NRL clubs have sided with Morrison and want the anthem to continue to be sung at Origin games.

12. Would you release your players to play in the World Cup in the United Kingdom at the end of the year given the COVID-19 situation?

The verdict: The World Cup in the United Kingdom is no certainty to be played at the end of the year and the clubs are split on whether they would want their players to travel during the COVID-19 pandemic. Expect a decision on the World Cup to be made soon.

13. Would you support a hybrid game between the Kangaroos and All Blacks at the end of the year? 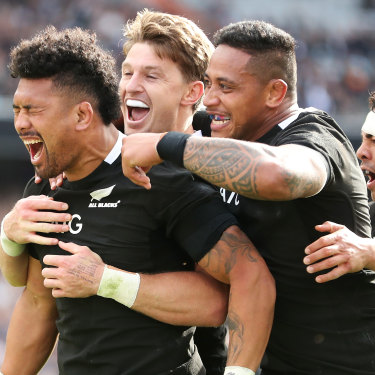 All Black Ardie Savea (left) celebrates scoring a try with Beauden Barrett and Shannon Frizell during the Bledisloe Cup match between the All Blacks and the Wallabies at Eden Park in Auckland last October. Credit:Getty

The verdict: The clubs are against the idea of a hybrid game, which has been kicking around for a number of years. The latest, being organised by promoter Dean Lonergan, had the support of the All Blacks but the NRL has to deal with clubs who don’t want their players to feature in the potential match.

14. How many transfer windows should the NRL introduce each season?

The verdict: It appears inevitable the NRL introduces a transfer window in the next couple of years, and 87 per cent of club bosses support the idea.

A committee has been formed to try and work out the logistics before the NRL negotiates with the RLPA.

“That’s a priority for us,” V’landys said. “There’s a working group going through that at the moment with the clubs and RLPA. The commission will consider some of those recommendations which come back.”

15. Do you agree with the NRL’s push to bring back all three grades?

The verdict: Peter V’landys will welcome this result, pushing hard behind the scenes to bring back all three grades to certain games each round. While there are still quite a few opposed to the idea, likely due to financial reasons, the majority support the idea.

16. Should player salaries be made public?

The verdict: Fans would love the transparency however it appears clubs would rather do their business behind closed doors.

17. Should the NRL expand the length of the NRLW season and the number of teams from this year? 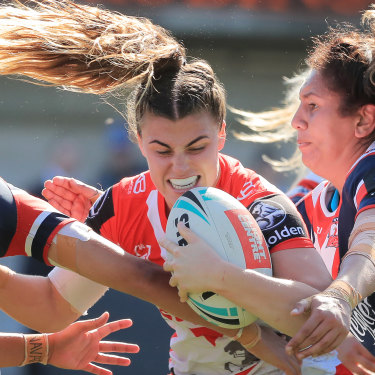 The verdict: Clubs are split on whether the NRL should increase the number of women’s teams from four and expand the competition beyond its current four-week season length.

18. Should the NRL persist with the All Stars fixture?

The verdict: It appears the Indigenous All Stars-Maori All Stars fixture is here to stay, with very few clubs having an issue with their players playing in the pre-season game.

March 8, 2021 Rugby League Comments Off on We asked NRL club bosses who they would want if they could sign any player. This is their verdict
NFL News