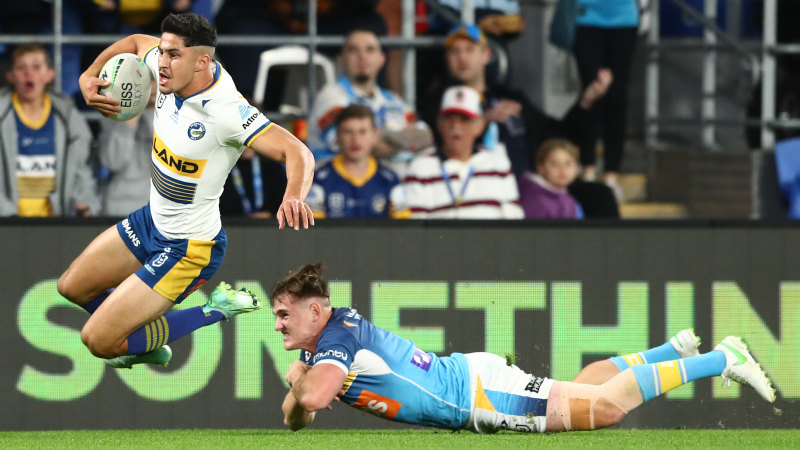 Parramatta have overcome the absence of Origin combatants Mitchell Moses and Junior Paulo to lock down their spot in the NRL top four as the season returned to its full draw after the interstate series.

CBUS Super Stadium on the Gold Coast provided a thrilling encounter on Wednesday night but the Gold Coast Titans weren’t able to conjure that sort of spirit against Parramatta and found themselves down 20-0 at half-time before losing 26-8.

It was another poor showing from a Titans side that had high hopes of a finals appearance in 2021 after some key signings. Maroons Origin enforcer Tino Fa’asuamaleaui tried hard all night but coach Justin Holbrook has some issues with his million-dollar man David Fifita.

The back-rower scored an opportunist second-half try but struggled to get into the game when it was still a live contest. He looked lost at times on his edge, was questionable in defence and was hooked after half an hour when the Eels started to run riot.

Fifita found some mojo in the second half as he went back to basics and started to charge into the line with some venom but it was all too little, too late – a reflection of the Gold Coast’s season at large. They need more from the former Bronco in a hurry although Holbrook suggested he had always planned to limit Fifita’s first half involvements.

“He was ok… he’s struggling. He’s not stringing a lot of games together so the plan was always to give him a rest regardless of the score,” Holbrook said. 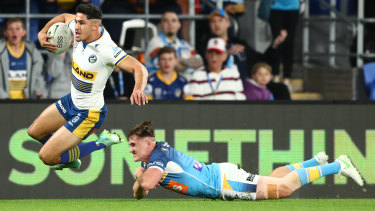 Dylan Brown skips through the tackle of AJ Brimson to score the first try for the Eels.Credit:Getty

“We have to get our whole attitude right and start from the start of the game. We didn’t take our chances early and didn’t get another to the end of the first half.”

At least Fifita is available; Titans halfback Jamal Fogarty left the field with a compound fracture of his finger and cut a forlorn figure on the Titans bench, while Kevin Proctor can look forward to a suspension for his hand in a lifting tackle. Phillip Sami was a casualty with a lower leg injury, while Moeaki Fotuaika was getting late treatment on his knee and Ash Taylor wasn’t able to finish the match.

At the other end of the field, it was largely smooth sailing for the Eels, who essentially had it wrapped up by half-time. That’s hardly unusual in the modern game, but their work fell off sharply in the second half and Brad Arthur wasn’t particularly thrilled with the sloppy execution that followed.

But the coach had few complaints after their opening 40 minutes. The Gold Coast looked sharp with the ball early, as they can often do, but once their defence began to fall apart the cracks in the line became canyons.

Arthur said he was more than happy with the statement they made in the first half following a difficult week, where players were transplanted from Sydney to new hubs in Queensland.

“Everyone has checked in, done the job. There was purpose about our start and we are here to do a job,” Arthur said.

“It’s been a tough week. Everyone’s lives have been turned upside down. We dropped off a bit in the second half but to play without Junior and Mitchell, it takes a squad. Our start was good, we sent a message to them early.”

Dylan Brown claimed the highlight of the night with a brilliant individual effort to carve up the Gold Coast and score in the ninth minute. He beat one defender after another and showed a clean pair of heels when he galloped into open space.

One became two, then three, then four for the Eels. Shaun Lane, the impressive Reed Mahoney and Haze Dunster rounded out the first-half scoring before Ryan Matterson, who was held up earlier in the contest, grabbed a deserved try in the second half to complete a straight-forward victory.

The Eels will get Moses and Paulo back next week as they try to maintain their second chance in the finals and put together a run that can challenge the enduring dominance of runaway leaders Melbourne and Penrith.