Melbourne coach Simon Goodwin has declared it's time for the Demons to "step up" and handle finals expectations when they face St Kilda in Alice Springs on Saturday night.

The Demons' bid to return to the finals will be boosted by the return of captain Max Gawn and former skipper Nathan Jones. Gawn has missed the past three matches because of a shoulder tear then a posterior cruciate ligament issue but has been cleared to resume for the crunch clash. 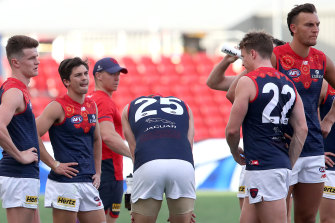 Melbourne after their loss to the Bulldogs.Credit:Getty Images

"It's time as a footy club we really stand up and perform well against some of the really strong teams and St Kilda are a strong footy club and we want to put on a really good performance in the Northern Territory on our home ground."

This clash against the Saints looms as a quasi-elimination final but the Demons still have Sydney (Cairns), Fremantle (Cairns), Greater Western Sydney (Gabba) and Essendon (TBC) to come.

"It's a similar situation to some that we have been in previous years, in '17 and '18 where you put yourself in a position in those seasons … now it's time to step up and really build some momentum," Goodwin said.

"That's what the teams do heading into finals – they build momentum at the back end of their years and they perform really strongly under the expectation and pressure of what that is going to look like. We are up for that challenge. We believe we can play good footy. We believe we can play good footy against the best teams. [Saturday night] gives us an enormous opportunity to do that."

Aside from last week's defeat, the Demons have lost to finals-bound West Coast, Richmond, Geelong, the Brisbane Lions and Port Adelaide this season.

In a week when the sling tackle, whether that be the action itself or the softening of AFL penalties, have been debated, Goodwin said Alex Neal Bullen, still serving a four-match ban, was still none the wiser why he had been handed such a heavy ban.

There is also much resting on this contest for the Saints, who have lost two of their past three matches, including by two points to the Lions last Sunday.

The Saints haven’t played finals since 2011 but a ninth win of the season would have them primed to break that drought.

Impressive defender Hunter Clark returns, having been rested last weekend after taking a knock to the knee, while key forward Max King will play.

There had been speculation King, with 18 goals in 13 matches, would be rested but Saints coach Brett Ratten said the young tall, in his first full season, was fine to play.

"That's an on-going discussion each week. With our well-being surveys, what we do with our wellness program, we monitor all the players in their sleep, their recovery, and he hasn't red-flagged yet. But then you have the flipside that he is a first-year player and how far do we want to push him in the one year," Ratten said.

The Saints have a bye after this clash, then have Hawthorn (Metricon Stadium), West Coast (Gabba) and Greater Western Sydney (TBC).

The two teams will share a flight to Alice Springs, Ratten joking that the Saints would bring a shower curtain for "right down the middle of the plane".

August 28, 2020 Rugby League Comments Off on Time for Demons to ‘step up’ and embrace finals pressure: Goodwin
NFL News