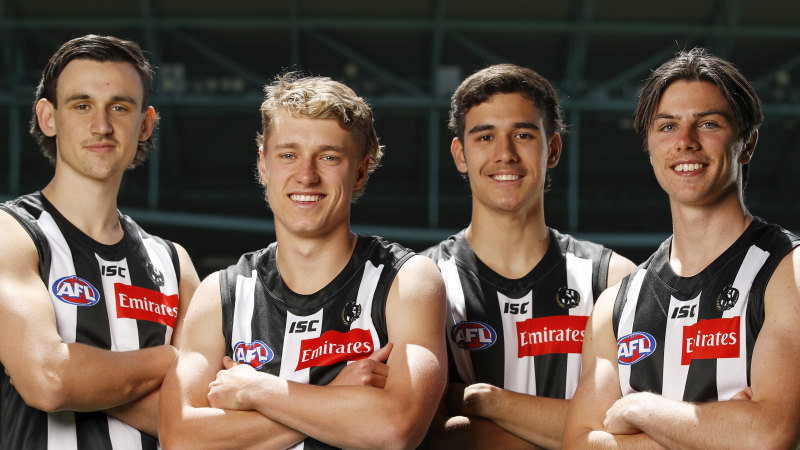 If there has been a unifying theme in the first three rounds of AFL 2021, it has been the teams that have dared, in both ball movement and team selection, have won.

Sydney’s transformation has been notable, not only for the unfamiliar attacking method unleashed by a hitherto conservative John Longmire, but for remarkable impact of the Sydney Cygnets (baby Swans), especially first-year players Braeden Campbell, Errol Gulden and Logan McDonald. 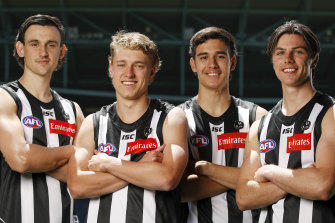 From left, Liam McMahon, Fin Macrae, Reef McInnes and Oliver Henry, part of the Magpies’ crop of young talent from the 2020 draft.Credit:Getty Images

Essendon, meanwhile, gained a timely burst of energy against the crippled Saints on Saturday through the inclusion of debutant Archie Perkins and the contribution of third-gamer Nik Cox, a 200-centimetre utility who shapes as the game’s best natural aerobic tall athlete (who can play) since Geelong recruited Mark Blicavs from steeplechasing.

For Collingwood and Nathan Buckley, the moment has arrived when the Magpies, too, must aggressively promote youth. It should begin this weekend when they face the depleted Giants and continue into their games against West Coast, Essendon (Anzac Day), Gold Coast and North Melbourne.

Since 2018, Josh Thomas and Will Hoskin-Elliott have been gifted games on the back of the career-best seasons in that year and on the lack of alternatives at Buckley’s disposal.

Today, due to the infusion of youngsters on the Collingwood list and removal of senior players, lack of alternatives is no longer an excuse. Thomas and Hoskin-Elliott have surely run out of chances. We know what they can produce and it will not carry Collingwood forward. 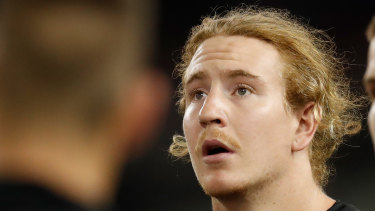 Beau McCreery looks on during Collingwood’s clash with the Brisbane Lions on Thursday.Credit:Getty Images

Arguably, the same applies to Jack Madgen, a serviceable role player, and while Callum Brown has the advantage of being relatively young, he has not performed at the necessary standard for some time.

Warrior veteran Chris Mayne, meanwhile, was brought back for the Good Friday eve game against the Lions in what was a retrograde selection, despite Mayne’s courage and footy smarts. When faced with a choice of Mayne or Beau McCreery, who was the sub, the coach opted for a 32-year-old.

Mayne might not come up for the GWS game after copping a heavy knock. Should he come out, his position must be filled by a kid.

It is clear from a perusal of Collingwood’s playing stocks and of the largely injury-free teams they’ve fielded (a rarity in Buckley’s time) this season that they are well short of premiership class; at their best, the Pies might snatch a lower berth in the top eight, but, in the short term, they’ve been weakened by the trading fire sale in which Adam Treloar, Jaidyn Stephenson and Tom Phillips were brutally offloaded.

Forced into the fire sale by long-term salary cap mismanagement (and the deferral of payments when they were trying to win a flag), last December brought a badly needed youth infusion via the draft, as Ollie Henry, Fin Macrae, Reef McInnes, Caleb Poulter, Liam McMahon and McCreery were drafted.

The best-case scenario for the Pies would be to emulate what Port Adelaide have achieved since their super draft of 2018: bring in a raft of talented kids to support a strong seasoned core, thereby lifting a mid-table team back into a potential premiership window.

Regardless of whether this is possible, Collingwood sorely needed a draft hand; if they did not replenish, they would have found themselves in a painful rebuild within a few years as Scott Pendlebury, Steele Sidebottom and Jeremy Howe shuffle off.

This year’s priority, thus, must be to position the club for another tilt at a flag. Buckley, regardless of whether he wishes to coach on, should be encouraged to coach for the future.

To date, they’ve promoted only Henry into the 22 from that draft haul and the Geelong kid struggled in round one before being dumped. He was marked far harder than senior teammates.

In fairness to the Pies, there’s some extenuating circumstances surrounding some of those draftees and Trent Bianco, a second-year player who might have been called up if not for injury.

McInnes, a prospective midfielder, has just overcome a long-term finger injury and played a VFL practice match on the weekend. Macrae, a natural inside midfielder, was set back by the death of his father, but performed well in the twos on Saturday, as did Poulter.

Recruiters believe that the players drafted from Victoria may not fare as well as usual v non-Victorians due to the shutdown of the NAB League last year. But that should not apply to Poulter or McCreery, as South Australians.

They will not fill each of these holes in one post-season. But, with Nick Daicos – a potential top-three pick – joining them next year, and the crop of 2020 harvested, the timing is right for the oft-conservative Buckley to follow Longmire and Ben Rutten by erring on the side of the young and untried, rather than the tried and tired.

April 6, 2021 Rugby League Comments Off on Time for Buckley’s Magpies to play the kids
NFL News