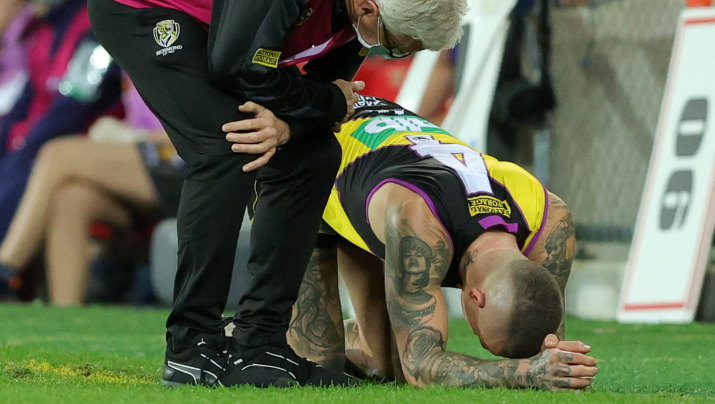 Richmond champion Dustin Martin remains in a Gold Coast hospital after suffering a kidney injury in a heavy clash with the Brisbane Lions’ Mitch Robinson during the Tigers’ win at Metricon Stadium.

He did not fly back to Victoria with his teammates on Saturday morning, and remains in hospital for assessment with the Tigers expecting to know more about the extent of the injury later Saturday afternoon.

The injury occurred as he gathered a loose ball at a centre bounce midway through the third quarter and collided heavily with Robinson. He struggled to get to his feet but eventually walked to the boundary line before returning to being on his hands and knees over the boundary line.

Tigers coach Damien Hardwick had been hopeful post-game the resilient star would be available for their next match against Geelong, who Richmond beat in last year’s grand final with Martin winning his third Norm Smith Medal.

“He got a kick into the stomach. We sent him to hospital for precautionary reasons. Obviously we’re flying home so we just want to make sure he’s available to fly. It would be a tough drive for Dusty otherwise, so we’ll see how we go,“Hardwick said post-game.

“Once we get further details on that we’ll pass them on. He feels sore but straight away he said he’ll be fine for next week but we’ll wait and see what the doctor says and what the scans show.” 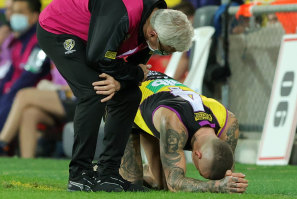 Dustin Martin has been sent for scans.Credit:Getty Images

Martin’s durability is incredible as the superstar has played at least 20 games in each of his 11 completed seasons for a total of 280 games at just 30 years of age. He is the best player of the past five years winning a Brownlow and three Norm Smith Medals on his way to three premiership.

Kamdyn McIntosh suffered a hamstring strain but Hardwick said he did not yet know the significance of the injury which will sideline the wingman for next week’s game against Geelong, however David Astbury avoided an ankle injury.

The Tigers 20-point win over the Lions has re-ignited their finals chances.

The Cats have proposed to move their home game from the MCG to GMHBA Stadium due to the restrictions on crowds and Hardwick said he had no issues with that.

“Completely understandable. Obviously it’s their home game and with limited crowds, I can understand that,” he said.

“Once again, we’re happy to play anywhere, any time. We’ve travelled a fair bit this year so it’s not going to hold any fears for us, we’re really looking forward to it, the challenge of beating them on their home deck.

“They’re in cracking form at the moment so we’ll go in certainly underdogs, but we’ll give it our very best shot. We’re starting to play some footy we know and love so we’re really excited to go down there and give it a crack.”

Veteran forward Jack Riewoldt, who kicked six goals in his 300th match on Friday night, joked post-match about eating McDonalds before his team’s flight to Queensland, as well as staying up until 1am eating meatball and watching the Tour de France. 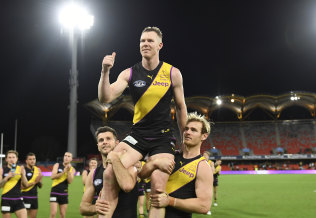 Jack Riewoldt is carried off after his 300th match.Credit:Getty Images

But Hardwick stopped short of declaring that the ideal preparation.

“I must admit, we got the call up late and there wasn’t a lot of food at the airport to be fair, so whatever the players could get into them for the long flight [so be it],” he said.

’We didn’t have dinner until about 10pm [Thursday] night. In fairness, the AFL did a great job getting us up here and getting the game going.

“We’ve got to be flexible and agile, that’s a term that’s become apparent in our terminology or vocab to be fair, so it was a great job all round.”

Hardwick said Shane Edwards was likely to come into the side to face the Cats, and with his side temporarily back in the top eight, Hardwick was optimistic his side still had a role to play this season.

“I think we’ve always had the confidence [we could play finals], we probably haven’t played to the level we would have liked,” he said.

“Our players coming in and out of the side and so our connection and consistency wasn’t there.

“We’re going to get the vast majority back we think so we’re really excited about what it does look like for us moving forward. Hopefully we make the finals but I reckon if we get there we’re going to cause some grief, so we’ll back ourselves in and see how we go.”