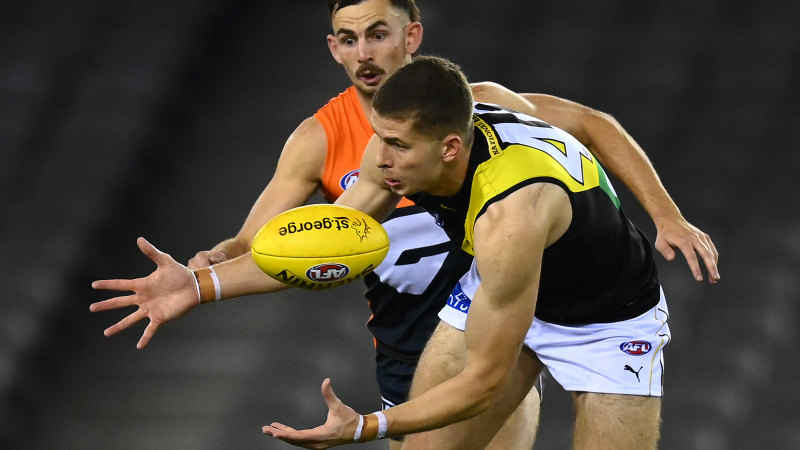 Two Richmond key forwards and rucks could be poised to leave the club, upending the Tigers’ plans for rebuilding their premiership squad on the run.

Highly rated Callum Coleman-Jones will decide next week if he will accept a two-year offer to remain at Punt Road or pursue a move, with Gold Coast and North Melbourne leading the push for the out-of-contract player. 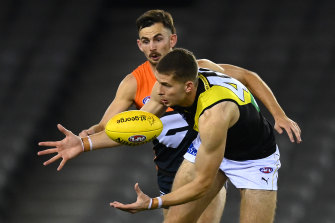 Athletic teammate Mabior Chol is sought by Essendon and North Melbourne as a versatile tall who could play in the ruck or as a key forward.

Unlike Coleman-Jones, Chol is an unrestricted free agent, so he can walk to other clubs without Richmond having the chance to match contract terms offered and force a trade. If the contract offer for Chol is sufficiently high Richmond could still receive a compensation pick in return.

Coleman-Jones was drafted at pick 20, the first pick in the second round of the 2017 national draft, having played most of his junior football as a ruckman and forward. The 200-centimetre tall has spent four years at Richmond developing primarily as a forward behind Tom Lynch and Jack Riewoldt.

The 21-year-old has played just nine games, including eight this season, with the Tigers believing more opportunities will continue to open up in the forward line with Riewoldt entering what is likely to be in his last season next year.

This time last year Coleman-Jones and teammate Sydney Stack were suspended for 10 matches and the club fined $100,000 when the pair was involved in a fight outside a kebab shop after they had been kicked out of a strip club on the Gold Coast.

That fine had to be included in the club’s soft cap on football spending.

Complicating the picture for both players when they consider opportunities ahead at the club is that Toby Nankervis and Ivan Soldo are both expected to be fit for the start of next season.

Richmond have a strong draft hand this year, holding Geelong’s first-round, St Kilda’s second-round and Gold Coast’s third-round draft picks as well as their own first, second and third-round picks. 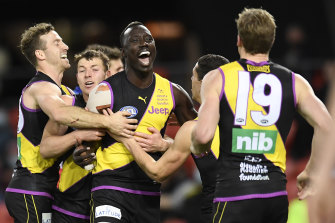 Richmond’s Mabior Chol could be at a new AFL club next season.Credit:Getty Images

While Coleman-Jones could theoretically walk to North Melbourne through the pre-season draft for nothing should he choose to leave Richmond and accept the Roos’ offer, he is unlikely to pursue this option and would want a trade were he to leave.

Gold Coast appear favourites to secure him if Coleman-Jones decides to leave. The Suns also have a strong hand of draft picks and could readily do a deal with Richmond.

He will meet with his manager Michael Doughty next week to decide on his future.