If forever being runner-up is traditionally likened to always being the bridesmaid, Steven Motlop keeps narrowly missing getting invited to the wedding at all.

On Saturday night he will line up in his fifth preliminary final in 13 years on an AFL list. 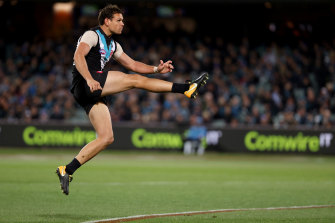 Steven Motlop would love nothing more than to play in a grand final.Credit:AFL Photos

After four stumbles at the season’s penultimate hurdle – three at Geelong (2013, 2016 and 2017) and one at Port Adelaide (2020) – Motlop is desperately hoping that by Sunday morning he will be looking ahead to his first AFL grand final.

“It’s everyone’s dream to play in a granny. Some guys can go their whole career without playing one. It’s all I want to do,” Motlop told The Age ahead of the Power’s date with the Western Bulldogs.

“Hopefully I’ve got a bit of luck on my side this time.”

Ranking the pain of each prelim defeat is a bit like trying to pick your favourite ulcer.

“Last year was pretty hard. I thought we had a pretty strong year,” Motlop said of Port’s narrow defeat to eventual premiers Richmond.  “They all sting. Hopefully we get a bit of luck.”

Luck is always nice, but Port might not need too much of it this time. The Power are humming at just the right time, largely fit and playing an up-tempo style of football that brought his former club to its knees a fortnight ago.

“We had a lot of injuries earlier in the year and were trying to get guys back, play together for a bit, and I think the last couple of weeks have been pretty solid,” Motlop said. 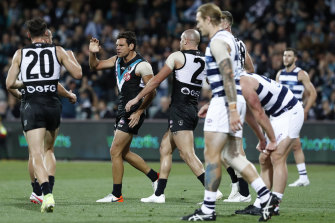 Steven Motlop celebrates after a goal in the qualifying final against Geelong last year.Credit:Getty Images

“We believe in the brand of footy that we play. And some guys had some opportunities earlier in the year when we had some injuries. You need to use your whole squad these days and we have a real squad mentality.”

If Motlop has never fully become the superstar he threatened to be early in his career, he remains a threat. Perhaps pigeon-holed by some because of his tremendous highlights reel, Motlop maintains that all along, he has prided himself on being a team-first player.

“I’ve always just been about playing my role for the side. And if you spoke to any high half-forward in the AFL, you’d know it can be a tough role at times,” Motlop said. 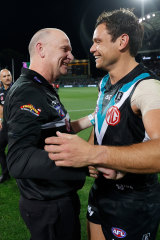 Asked if things were a bit different now that he was in the “veteran” category, Motlop takes light-hearted offence.

But he goes on to explain that he hopes his experience is helping the likes of Zak Butters and Connor Rozee.

“A bit more of a leadership role as well, with a lot of young guys playing throughout the year,” Motlop said.

“I think just being experienced in playing footy. I’ve played for 13 years now and been very lucky to be able to play at a couple of very good clubs and learn a lot about football. And even playing 200 games this year is a fair bit of footy. I’ve just learnt along the way. And I’m just really enjoying working with our younger guys. We’ve got a lot of great young talent and hard workers at our club.”

He lauds the “footy IQ” of Rozee and Butters. “It definitely makes playing footy fun, and they work really hard as well.”

And coach Ken Hinkley’s support of his players is shining through too.

Motlop is coming to the end of the four-year contract he signed when joining Port as a free agent, but feels like he has plenty more to give.

“We’re just in talks now with the club. Body’s all good so can’t ask for more being 30 years of age.”

Away from the field Motlop enjoys playing golf and continues to strum the guitar, a hobby that attracted attention early in his career.

He remains close with his former AFL player brothers Shannon (who lives in Darwin) and Daniel, who is close by in Adelaide.

They work together on the Seven Seasons Spirits alcohol brand which champions the use of native Australian ingredients. They also sell native game.

“We still talk about footy. Our family’s played footy our whole life, all our uncles, my grandfathers. Footy’s our life,” he said.

A proud Larrakia man, Motlop has watched attitudes towards Indigenous Australians evolve across more than a decade in the big time.

September 10, 2021 Rugby League Comments Off on ‘They all sting’: Motlop desperate to make it fifth time lucky
NFL News