You wouldn't have blamed NRL executives for cheering on the Melbourne Storm to victory on Sunday night considering the governing body invested a whopping $4 million to keep them in the competition this season.

When Victoria went into shutdown in June, the Storm packed up their families and relocated to the Sunshine Coast via Albury in a bid to continue playing, with many of the players' children enrolled into Queensland schools during that period. 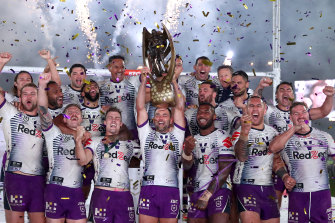 The Storm celebrate with the premiership trophy at ANZ Stadium.Credit:Getty

The NRL paid for meals, accommodation, chartered flights and expenses throughout the club's four-month stay at Novotel Twin Waters. It cost the NRL about $30,000 in flights for each round trip the Storm made this year. The NRL also paid about $5m to relocate the New Zealand Warriors in Tamworth, and then the Central Coast, for five months.

Queensland government COVID-19 restrictions meant the Storm were back on a chartered flight from Sydney airport in the early hours of Monday morning following the grand final. The NRL chartered 75 flights during the 2020 season, including six-seater propeller aircraft for match officials to fly to Queensland for games not involving NSW teams.

With a couple of exceptions, the players have done a fantastic job abiding by the bubble restrictions in 2020. But the expectations after the grand final were bordering on lunacy.

Penrith players, staff and families went back to Panthers Leagues Club for a private function after the game, but the NRL wanted the club's Origin-bound players to be separated from the majority of the 100-odd people in the room. 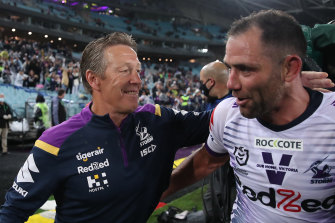 Back on top … Craig Bellamy and Cameron Smith at ANZ Stadium on Sunday night.Credit:Getty

Donaghy is tipped to get the job set to be vacated by Paul White, with conversations set to be held in the coming days to work out the specifics. Coach Craig Bellamy has been reportedly offered a coaching director's role at the club from 2022 but he has done his best to distance himself from the talk during Melbourne's finals push. Expect the noise to get louder now.

It was heart-warming to see Ivan Cleary's brother Ash in the stands at ANZ Stadium on Sunday night. Ivan had a kidney transplant three years ago to save his brother's life, however his other brother Stuart wasn't at the game. Stuart watched on from Hong Kong, unable to return home given the international travel limitations. 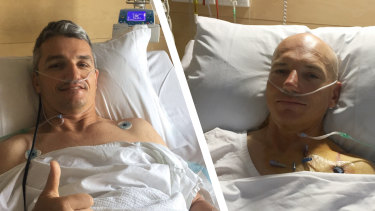 Ivan and Ash Cleary after the Penrith coach donated his kidney to save his brother’s life in 2017.

Such was his belief in his old club, Penrith's 2003 grand final hero Scott Sattler purchased tickets for he and his son to this year's decider well before the Panthers qualified. Sattler lives in Queensland and COVID-19 restrictions denied him the opportunity to attend, so he contacted Penrith officials and offered to give his tickets to a fan who couldn't afford the price of admission. Sattler contacted the fan, who at first thought he was the victim of a prank, to pass on the tickets on Saturday morning.

Joyce stays in the stands

For the first time in many years, Joyce Churchill, the wife of the legendary Clive Churchill, was unable to present the medal named after her husband for the best player in the grand final. Churchill was at the game but, due to COVID protocols, the NRL prohibited her from handing over the medal after the match.

Dr Malcolm Lyttle, the surgeon who repaired Josh Mansour's face after the horrific 2018 injury, spoke to the Herald about the severity of the incident. 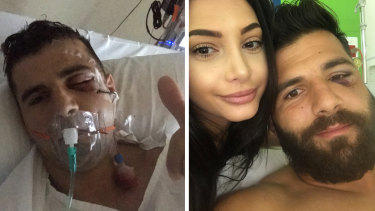 Penrith winger Josh Mansour in hospital with wife Daniella after suffering a major facial injury in 2018.

Lyttle said the worst facial injury he'd seen throughout his career was of a woman whose facial bones had moved back 2.5cm into her head after her car hit a cow at 100 km/h. For context, Mansour's cheekbone had sunk 1.5cm into his face.

Flanagan set to run with Dogs

The Roosters are expecting Kyle Flanagan to depart the club in the coming days to join the Canterbury Bulldogs. Flanagan's father, Shane, pushed hard for him to go to Cronulla, but the Sharks' reluctance for the former coach to return was a factor in the halfback deciding to link with Trent Barrett and the Bulldogs.

October 25, 2020 Rugby League Comments Off on The price of success: How much it cost the NRL to keep the Storm alive
NFL News