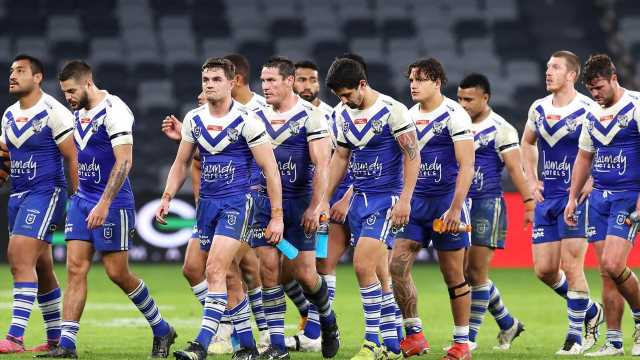 NRL fans thought the tide had changed with two games on Friday being decided by one point but the carnage resumed as a series of blowouts brought the league’s controversial rule changes into even sharper focus.

Manly thumped the Bulldogs 66-0, Gold Coast belted Canberra 44-6 and Newcastle ran riot against the Cowboys in a 38-0 hammering on Saturday, resulting in a 148-6 bloodbath across all three matches.

The last time a single day of NRL action had such a huge gap between the winners and losers was in 2003.

That’s in addition to Melbourne pumping the Roosters 46-0 on Thursday.

Last time a Saturday this lopsided happened in the #NRL was all the way back in 2003.

Remember that being shocking at the time. Now, nothing special. https://t.co/5QEWzrj52E

New rules introduced in 2020 and 2021 designed to speed the game up have certainly led to a frenetic pace — but they’ve been blamed for exacerbating the gulf between the best and worst teams in the competition.

Australian Rugby League Commission chairman Peter V’landys was credited with saving the game last year during the pandemic but the blowtorch is being put on him for ushering through rule changes some believe have rendered rugby league unwatchable.

Set restarts for ruck infringements also now apply to players pinged for being offside, rather than resulting in the usual penalty, while scrums were replaced with play-the-balls whenever the ball goes over the sideline.

It means there are fewer stoppages, giving weaker teams fewer opportunities to catch their breath and reset their defensive structures, resulting in more points being scored.

V’landys has refused to accept blame for the increase in blowouts this season, saying the onus is on poor teams to manage their rosters better to become more competitive.

But not everyone sees it like that. NRL legend Johnathan Thurston believes the rule changes are directly linked to the massive winning margins we’re seeing.

“Teams are getting exposed. That’s what the rule changes were designed to do — score more points — but with that, we’re seeing a lot of blowout scores so it’s a worrying trend for the NRL,” Thurston said on Sunday.

“It’s not good for the fans going out there paying their hard-earned cash and seeing their teams get absolutely hammered each and every week.

“I don’t know how to stop this trend. That’s what happens when the NRL makes changes to the rules and this is a consequence of it.” 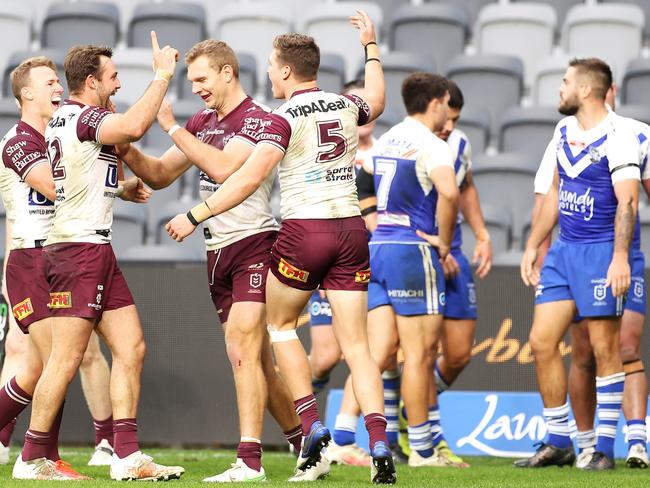 It’s either agony or ecstasy in the NRL these days.Source:Getty Images

Even players are upset with what’s happening. Melbourne and Queensland prop Christian Welch provided an insight into why the increased speed is causing more blowouts, revealing he’s no fan of how the rule changes have transformed the game.

“It’s just so hard to stay in games mate, you just can’t stop the momentum you are that cooked. Teams just go end to end,” he tweeted on Sunday.

“It’s just a different game now mate. There’s just no more tension/pressure/field position. The grind has been completely eliminated which I reckon sucks.

“Bit depressing isn’t it … grind/pressure/field position battle have all evaporated.”

Plenty of punters have voiced their frustrations too. It was only a couple of weeks ago fans were blowing up after a series of one-sided games and it was a case of deja vu on Saturday.

“Not so super Saturday that, interested to see how many neutrals would have flicked off early.”

Former Queensland cricketer Luke Feldman wrote: “These blowouts are terrible @NRL @FOXNRL this needs to be fixed and fast!”

Ex-NRL player Cameron King said: “NRL is the best & toughest game in the world. There is no way a game should end 66-0 that’s not what the fans want. That’s my opinion.”

July 4, 2021 Rugby League Comments Off on The NRL is officially broken and everyone knows why
NFL News