Sam Naismith's first game back from a knee reconstruction in round one this year was special – and not just because it had been 919 days since he last played. His sister, Kristi, seriously ill with pancreatic cancer, could again watch her younger brother play.

His next game, 97 days later, was also an emotional occasion. It would be his first without Kristi, whose brave, two-year fight with the disease ended weeks earlier, in late May. 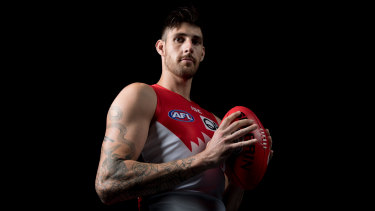 Sydney’s Sam Naismith played through the pain of a series knee injury to honour his late sister.Credit:Janie Barrett

So determined was he to play in her honour, he took to the field with a damaged anterior cruciate ligament sustained two days earlier at training. It was a closely guarded secret. Only his housemate, Robbie Fox, and Isaac Heeney knew of the injury.

"I was setting my sights on playing that game so I didn't want to flag it too much," Naismith says.

It speaks volumes of Naismith's strength of mind that he not only played, but made it as far as the final quarter, posting 25 hit-outs and five tackles with a knee that had swollen to the point his thigh muscles could not function properly. If by playing he made the injury worse, then he can live with that. 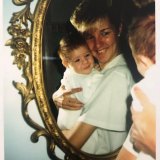 Sam Naismith being held by his sister Kristi as a baby.Credit:Instagram

"You set your heart to something [and] there's a fair bit of willpower there, I suppose," Naismith says. "I didn't really want to miss [the match through injury].

"[I] pivoted, stepped off my right foot in a competitive drill, I felt it go. I didn't really think too much of it. It swelled up overnight. I was trying to ice it and rest for a couple of days before we played.

"Throughout the game it kept getting worse and worse. Towards the end I thought I'd come off and stick a fork in it because we were losing, we were dust and I didn't want to make too much more damage to it.

"If that was the last game I played, it's a pretty special moment to run out with an armband for my sister."

In a year that has tested the resilience of Australians like no other, Naismith has not allowed himself to wallow, even if he was well within his rights to dealing with a personal tragedy and a potentially career-threatening injury. In the lockdown period he saw a silver lining.

With the blessing from the club, he was able to alternate weeks training in Sydney and in Mudgee, a three-and-a-half-hour drive north-west of Sydney, to spend more time with his sister. He would make breakfast for her, sit in bed with her and watch shows on Netflix.

"It didn't matter what we were watching, it was more so about being with her," Naismith says.

If that was the last game I played, it's a pretty special moment to run out with an armband for my sister.

He speaks in awe of the strength Kristi showed in a battle he says she knew deep down she would not win.

"She didn't let it affect her too much," Naismith says of Kristi, who died aged 46, leaving behind her husband, Rodney, daughter Emily, 19, and son Jack, 16. "She was so strong. Even though she knew she was leaving, she wasn't sitting around waiting for it.

"She was on the front foot organising stuff. She was planning things, which to me was so bizarre and scary, organising things for when she's gone.

"It was bizarre to comprehend someone being so casual about it. I knew she was very scared, as we all were. She was very mentally strong in that regard."

The lessons Naismith learnt from his mental health struggles in 2018 held him in good stead for this battle. Instead of dwelling on his injury woes – which have limited him to just 30 games while fellow 2012 draftee Dane Rampe has played 170, Naismith threw himself into rehab.

Hub life has not only given him the routine he craves but the camaraderie that comes with team sport and achieving a common goal.

"You don't try and think about yourself too much, you've got plenty more distractions," Naismith, who is contracted until the end of next year, says.

"I suppose when you're in the hub with the team the idea is to win games for the team. You get caught up in that and try to help out as much as you can in what you can do.

"Essentially that's like my support network now. Having 40 of your mates around you and staff, it's a bit of a support network, a bit of an escape to focus on other things rather than yourself.

"I love routine and being able to focus on things I can control. One of those things was controlling my training and rehab and being around the physios and the boys, it really narrows your focus down, which was ideal for me. I'm a big fan of routine."

He says he is confident he will be able to cope once the season ends and players go their separate ways. Any break he has will be short as he works towards a return for round one next year, whenever that will be.

"It's [Kristi's death] was not an easy thing to deal with but it definitely put life in perspective – this is nothing compared to what my sister or other people are going through," Naismith says. "And it's nothing I haven't come back from before so I know I will be bigger and stronger next time."