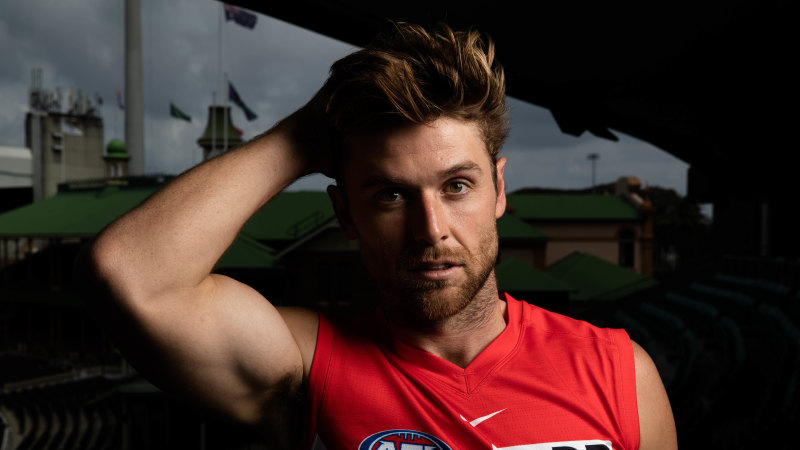 Isaac Heeney is hopeful Sydney’s inspirational co-captain Dane Rampe can emulate his own rapid recovery from injury to help the undermanned Swans nullify one of the AFL’s most lethal forward lines on Saturday night.

Heeney was fearing another week or two on the sidelines but only ended up missing one match with a broken hand, although his ahead-of-schedule return had little impact for the Swans as they slumped to a 40-point defeat to Gold Coast – their second loss in a row. 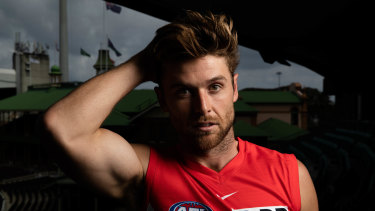 The Swans are sweating on the fitness of co-captain Dane Rampe ahead of Saturday night’s clash with Geelong at the SCG.Credit:Janie Barrett

An even tougher assignment looms at the SCG in the clash with Geelong and the Swans desperately need key defenders Rampe (broken finger) and Tom McCartin (hamstring) back on deck to play on on Tom Hawkins and Jeremy Cameron, two of the AFL’s best spearheads who combined to lethal effect on the weekend in their first match together.

Cameron and Hawkins, the last two Coleman medallists, each kicked three goals as the Cats destroyed West Coast by 97 points.

Swans coach John Longmire spoke encouragingly about McCartin’s prospects of playing earlier this week – however Rampe needs not only the green light from a meeting with surgeons on Wednesday, but a strong training session on Thursday for him to be any chance of lining up on ex-Giants star Cameron, his old Sydney derby foe.

“He comes back pretty quick and pushes the boundaries too. I’m sure he’ll want to get back ASAP, whether it be this week or next,” Heeney said. 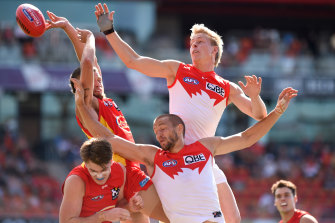 Isaac Heeney attacks the pack against Gold Coast with his recently-broken right hand covered by a protective glove.Credit:Getty Images

“We do need him and we need our talls to fire this week because Hawkins is obviously an elite forward and you’ve got Jeremy Cameron back in and straight back into form.

“Their forward line’s incredible. You look at it on paper and it’s absolutely incredible but I’ve got full faith in our defenders that they can put the work in, study them and get the job done on the weekend.”

Rampe’s Wolverine-like recuperative powers are already well-established – he broke his finger at training before their win over Richmond at the SCG, then pushed through the pain barrier again five days later against Essendon before being sent for surgery.

But if further inspiration is required, the 30-year-old need look no further than Heeney, who was a shock inclusion for the Suns clash.

Heeney admitted he surprised even himself at how soon he was able to return to the top grade after surgery on the hand he shattered in Sydney’s round four clash with Essendon.

“We just spoke to [the surgeon] and said, ideally, how quick can I come back? And he goes two weeks should be your minimum, roughly – he said Geelong match, we should have you right by then,” he said.

“So we looked at each other, the physio and I, and we’re like, done: let’s try and get back for Gold Coast. A few things went right, surgery went really well … it was legit the next day I went into the hand therapist and got it moving.

“Structurally it’s sound, with a good plate and seven screws in it. I was lucky to get back and it’s pulled up well.”

The Swans need all the healthy bodies they can get at the moment, with George Hewett (concussion) and Sam Reid (calf) both to miss the Geelong match, while Nick Blakey (corked thigh) is also in doubt – joining a casualty list that already included Lance Franklin (bone bruising), Tom Hickey (knee) and Sam Naismith (knee).

But Heeney said the shortage of key personnel was no excuse for how they played against the Suns, admitting it came as a wake-up call to the highly-touted youngsters who helped Sydney explode to a 5-0 start to the season.

“It’s nice that young fellas can slip in and we can have some really impressive wins. But I guess it shows you that AFL footy’s not that easy,” he said.

“It can be a battle sometimes and easy wins, you don’t get those these days. The way you move the footy, it all starts with effort. And if it’s not there for four quarters, any team, no matter what rut they’re in or position on the ladder, they can shake up any side.

“We’ve just dropped away a little bit. It’s just about getting back to what we know well.”