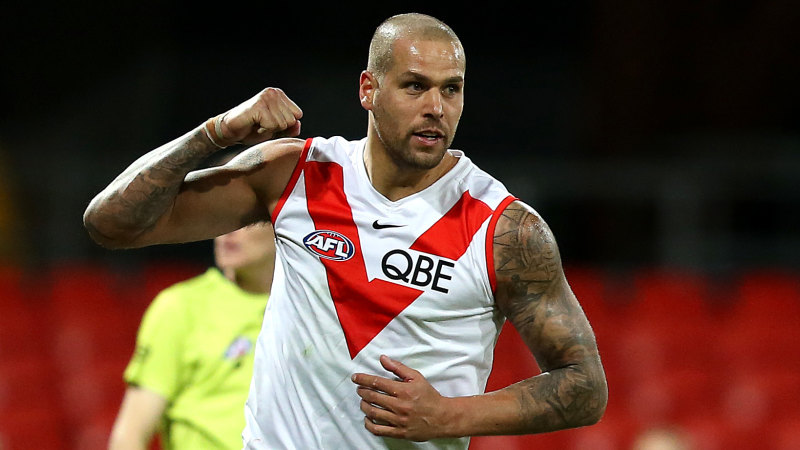 Sydney flicked on the switch and short-circuited the Giants to continue their charge to the top four with victory in an action-packed Sydney Derby.

In a match of wild momentum swings, the Swans came back from 35 points down to land a hammer blow on the Giants’ finals chances with a 15.8 (98) to 11.6 (72) win that keeps them in sixth place but only a game behind Port Adelaide in fourth.

After giving up seven goals in a row in the first and second terms, the Swans piled on nine in a row either side of half-time to turn what was appearing to be a sobering defeat into a stirring win.

The topsy-turvy nature of the game reflected the pre-game COVID-19 chaos when stars Toby Greene and Callum Mills were among five players withdrawn after being caught up in the AAMI Park Wallabies exposure site.

The drama had a greater impact early on the Swans, who missed Mills in the midfield, but Greene’s absence was keenly felt when the Giants needed someone to reverse their fortunes.

The salt was rubbed into the Giants’ wounds when midfielder Josh Kelly subbed out with ankle injury and ruckman Matt Flynn twice had his shoulder pop out after a collision with Hickey at a centre bounce. 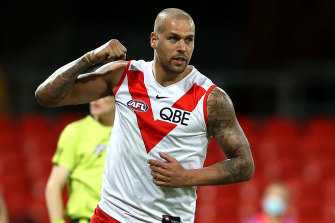 Four goals after the long break to Lance Franklin helped the Swans to a potentially crucial come-from-behind win.Credit:Getty

If there was a duel that best summed up this game it was that between Lance Franklin and Sam Taylor.

Aided by some shoddy disposals, Taylor completely outpointed the superstar forward in the first half but Franklin was dominant after half-time with four goals.

“After half-time we were able to change the momentum and capitalise,” Franklin said.

The Swans old guard of Luke Parker and Josh Kennedy kept their side in the hunt early while Tom Papley’s four goals were crucial. 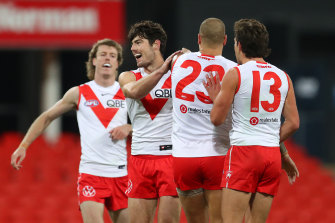 The Swans are now just one win behind fourth-placed Port Adelaide.Credit:Getty

The Swans made started their run against the flow shortly before the long break but were breathtaking in the third quarter.

Their worst has seen them drop games to the Gold Coast and Hawthorn but their best is capable of going deep into September.

There was a passage of play in the third quarter that summed up Sydney’s strengths. After creating a turnover at half-back through Dane Rampe and Tom McCartin, the Swans started a chain of possessions through the corridor which finished with Tom Hickey booting a superb goal on the run.

It was in marked contrast to the first third of the game when they were stifled by the Giants’ pressure.

Playing for a place in the eight, the Giants were on top in the midfield where the ability of Tim Taranto, Callan Ward and Jacob Hopper to win the contested ball, and Josh Kelly’s running power had the Swans chasing the game.

After a defensive masterclass last week against the Bulldogs, the Swans were sliced apart in the opening 40 minutes of the game.

Their inability to lock the ball in their front half, or even apply a handbrake on the Giants’ runners, exposed their back six, allowing plenty of space for Harry Himmelberg and Jesse Hogan.

July 18, 2021 Rugby League Comments Off on Swans finish all over Giants to claim derby honours after COVID chaos
NFL News