Aaron Booth drove into Melbourne on Sunday ready to put his all into a trial with the Melbourne Storm but he flew home to Brisbane on Tuesday with his dream on hold.

The 24-year-old hooker made a big impression on the Storm during pre-season with the team winning the award at the club's annual I Don't Quit camp for his resilience and endurance during three sleepless days of exhaustive physical and mental training.

Booth showed that same resilience when faced with the disappointment of joining the rest of the Storm players in being sent away on Tuesday following the NRL’s decision to suspend the season until the coronavirus pandemic subsides. 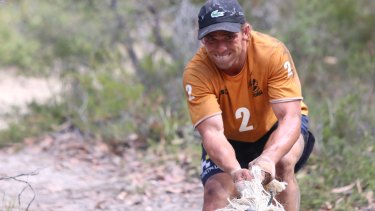 Aaron Booth puts in the hard yards for Melbourne Storm during the pre-season.

With Cameron Smith, Brandon Smith and Harry Grant all playing the hooker role, Booth wasn't needed leading into the season but was invited back when Grant was finalising his move to Wests Tigers for this season.

But when Grant’s move stalled, so did Booth's, at least until this past weekend when Grant headed to Sydney.

Booth packed his belongings and began driving to Melbourne on Saturday while his partner was in the process of transferring her job to join him.

But after completing a weights session on Monday, Booth and his teammates began hearing that the NRL season would be on hold and he realised his dream would have the same status.

The Storm had 12 players rush back to Queensland on Tuesday ahead of the border closure with the team being placed on leave for at least the next four weeks under instructions to stay fit but expect a long stint on the sidelines.

With Queensland planning to shut it borders at midnight on Wednesday, Booth boarded a flight back and will store his car and most of his belongings in Melbourne with hope he can pick up where he left off once the season resumes.

"There was a brief conversation that 'if this is the path that happens' then it would mean time off but I'd rather be in this situation now going back to Brisbane than not have the opportunity at all," Booth told The Age from Melbourne Airport.

"It still means I'm coming back in the future, it's just not immediate.

"I didn’t want to let it slip so I ran the risk this may happen.

"It has just happened a little sooner than I expected."

Booth plays with Storm feeder club Easts Tigers in the Queensland Cup and has deferred his tertiary studies, he recently been picking up some shifts moving things for an interior design company in Brisbane.

"There is a ripple effect to this but I'm still better off than a lot of people," Booth said.

"I'll make the call to see if I can get a few shifts as it will be a slow month if I'm just waiting around, I'd rather get some things done and keep some money coming in."

Booth, who hails from Brunswick Heads near Byron Bay, has much more he wants to do with the Storm, including learn from skipper Cameron Smith who was still on extended leave when Booth was with the team during pre-season.

"The Storm are the top of the mountain in terms of clubs and what they do so pre-season was pretty surreal," Booth said.

"I plan to learn as much as I can. Even with this break, I plan to keep a positive mindset that it will be a good year once this passes and everyone comes through it unscathed."