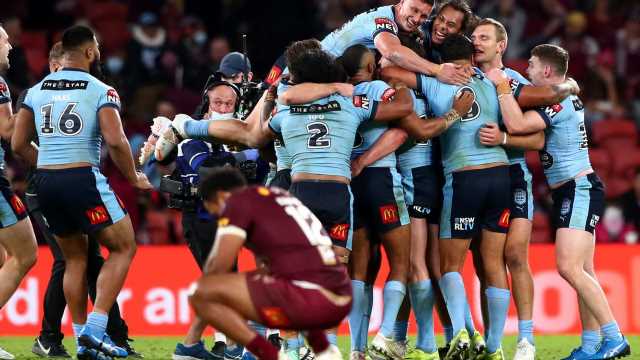 A year after getting upset by “the worst Queensland team in history”, NSW have turned it around in 2021 as they could honestly be seen as the greatest Blues side in history.

Playing the first two games of the series, after losing what many considered an unlosable series in 2020, the Blues have been unstoppable with a 50-6 win in game one and wrapping the series 26-0.

The only problem with the two game shellacking is probably the opposition this side is against.

Queensland skipper Daly Cherry-Evans was in tears at full-time as the Blues not only beat the Maroons, they spanked them in their own fortress.

It’s not what the rugby league world is used to.

While a 2-0 series win is one thing, it’s how the side have done it.

The Blues are terrifying.Source:Getty Images

The Blues lead the series after two games 76-6 and Queensland have never looked close to being in the contest as NSW wiped them off the park, despite the first two games being played north of the Tweed.

“Strike all over the park,” Andrew Johns said in commentary as the Blues opened up the 26-0 lead.

“It’s the understanding, it’s the confidence. This team is building and building and is only going to get better and better, which is frightening.”

Although game three is up in the air with NSW’s Covid-19 outbreak, the Blues hardly need any more advantage.

A year on from the stunning upset, Anasta said “DCE and Munster, they didn’t fire a shot”.

Social media went into overdrive post game as the epic mismatch began to sink in.

I’m not sure where this NSW team ranks but I’m certain about where this Qld one does. Also as good as they have been, the NSW backline isn’t the best ever. That’s crazy talk. #StateOfOrigin2021#soo#StateOfOrigin

The determination to the death from this NSW team in both Games I and II just screams of players who grew up through years and years of Origin pain. #Origin

The Blues back five have been the difference. And I’m not talking about the obvious big plays. Their starts to sets have been tremendous. Qld are getting smashed on the first couple tackles.

The Latrell interception. The Turbo arm slap on Coates. The To’o tackle on Feldt. The Blues were magnificent every time QLD looked like scoring #StateOfOrigin

Best blues team in decades. Worst qld team ever. Gonna be a few years before the tides turn I imagine.

Tooo goooood! 🙌🏽 this is unreal to watch. Both edges 🔥 @NSWBlues#Origin

Already the post-mortems were being written for the Maroons throughout the match, but the 2021 Blues were already being compared to the best Queensland have ever had to offer.

“I think this Blues team as it evolves is starting to emulate some of those great Queensland teams we saw when they were winning eight and 10 in a row,” Phil Gould said post-game. “Queensland had a really strong, hardworking forward back who were happy to do that and this brilliant effective back line that could score tries from anywhere on the field.

“Without this attitude in defence to be saving tries, we often say saving is better than scoring them, the Blues working as a team, there’s always more blue jerseys in the picture.

“That is protected their line as though their life depended on it. The nucleus is there. When you look at the great Queensland sides that used to beat us, hard working forwards that never got dominated. That’s what our forwards did. Our forwards were selfless. They’re happy to play their role and let Cleary ignite the rest of the players.”

DCE’s 2021 Maroons were not in the same ballpark as the Blues.Source:Getty Images

League legend Peter Sterling said that there was a path for the current Blues to make a legacy that could be seen to eclipse that great side.

“Interesting you mention that great Queensland site of eight straight, I don’t want to get too far ahead and take anything away from tonight, even during that period very few clean sweeps,” he said. “If you look back through the 39 best of three series, not many clean sweeps. Great opportunity here for NSW to really stamp their authority.

Andrew Johns added: “You’ve got to remember these young guys, some older guys in the NSW team, they grew up watching the dominance of Queensland thinking, if I get my opportunity, my watch, things are gonna change. This team, if it stays together with injury and that sort of thing, it’s only gonna get better and better and better. Some of the attack tonight was breathtaking.”

July 2, 2021 Rugby League Comments Off on State of Origin domination puts 2021 NSW Blues up with the greatest
NFL News