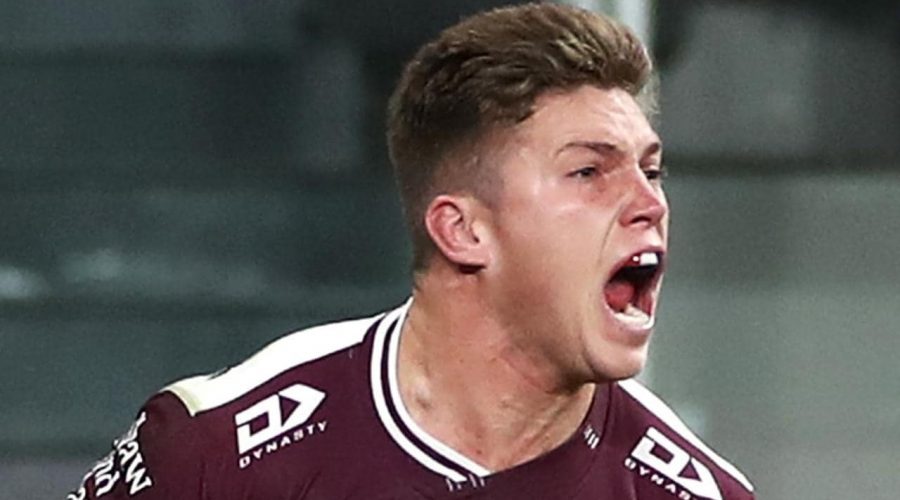 The 56-10 massacre on the Sunshine Coast was a masterclass by all Manly’s guns with halves Kieran Foran and Daly Cherry-Evans in the kind of form that won the Sea Eagles their last title.

Garrick, who needed just 17 points at the start of the game to equal Matthew Ridge’s club record of 257 points for a season, all but had the record in his grasp when he’d scored a double and landed four goals by halftime.

When he converted Moses Suli’s second half try he surpassed Ridge’s record, which had stood since 1995.

“Reuben works really hard at his game so it is very deserving but he will be the first to say he is on the end of a fair backline,” Hasler said.

“Ridgey was ultra-competitive too, so it is a great personal achievement for Reuben.”

Parramatta could not have played any worse with passes going over heads and to ground, tackles missed with abandon and general lethargy infecting the entire playing group. To add to the Eels woes, back-rower Ryan Matterson was sent off for a shoulder to the head of Brad Parker who was taken from the field.

The Eagles rocked from the opening whistle with Cherry-Evans setting up Parker with a slick grubber.

Trbojevic set up his favourite winger Garrick and scored himself after more Cherry-Evans magic. Further tries to Garrick in the 27th minute and Dylan Walker (29th) and Manly had the game in their grasp at 26-0.

The carnage continued in the second half with 18th man Suli scoring a double.

Manly’s defence was punishing but some of the Eels’ errors were comical with Mitchell Moses dropping the ball cold after kicking the ball straight up in the air and trying to back heel it as it came down.

Eels coach Brad Arthur said his side was “down on belief”

“We couldn’t afford to start like that and it just snowballed out of control,” he said.

“I haven’t got the answer right now for why that (intensity) wasn’t there. We are not showing that we want to play finals.

“I probably have to change things up at training this week and not focus on footy. Sometimes the harder you work the more of a hole you dig yourself.”

Hasler was thrilled with his side’s performance.

“They started the game with a lot of emotion but we were able to match that and get out of the blocks really early and play some really good footy. It was just important that we got the win tonight,” he said.

Garrick must pinch himself to be playing alongside Turbo Tom. Trbojevic set Garrick up for his first try, the 12th try assist that the Manly fullback has laid on for his left winger this year, and then again for his hat trick. Garrick’s form this year has been stellar in general play and with the boot and his record breaking night was capped with the club record and a personal haul of 28 points.

Foran and Cherry-Evans were unstoppable in the Sea Eagles run to the 2011 title and a decade on they are winding back the clock. Both were on fire against the Eels with Foran’s direct running and sleight of hand to the fore. Cherry-Evans’s precision kicking, passing and probing created havoc.

Parramatta’s fourth loss in a row has them on the slippery slide down the ladder and with games against the Storm and Panthers to come their pain is set to increase. They will struggle to beat the Cowboys next week. The disinterest of so many of their players in such a big game was hard to fathom. It was summed up by Maika Sivo strolling back to collect a kick and all but walking into the defence.