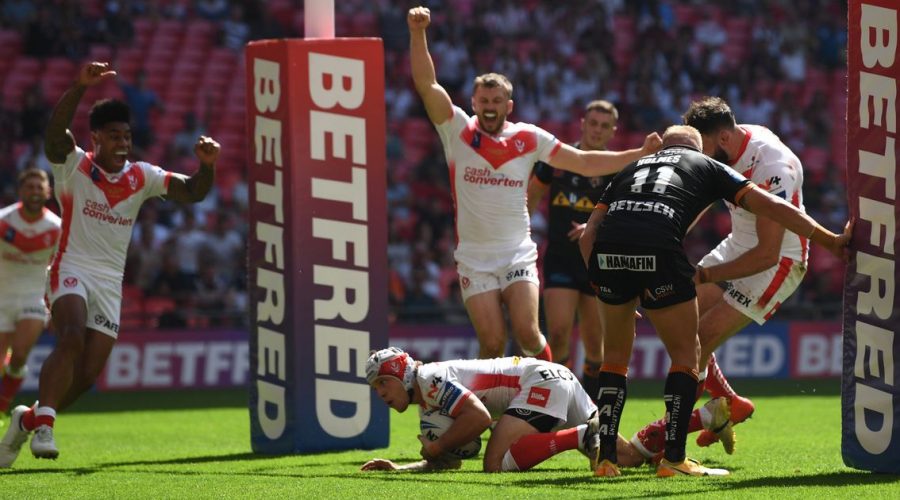 The 35-year-old skipper played all 80 minutes in soaring Wembley temperatures and covered every blade of grass on the field.

He also came up with the most contentious play of the game, following through to touch down after Castleford disputed three incidents in the build-up to the try. It came 14 years after Roby scored the first try back at the new Wembley in 2007, and at a vital stage of a gripping clash.

But just as important was the manner in which Saints regained their composure after trailing 6-12 at the break, in what was an outstanding showpiece event.

Castleford had bounced back themselves from a shaky start, scoring tries through the excellent Niall Evalds and Jake Trueman to lead at the break.

But they couldn’t find their attacking cohesion after the restart as Saints slowly turned the screw to deny Tigers coach Daryl Powell a trophy in his final season at the club before leaving for Warrington.

Powell’s side led 12-6 at the break after a breathless first half, despite spending the majority of the opening 15 minutes on the back foot as Saints dominated.

Kristian Woolf’s side crossed first when Jonny Lomax kicked in behind the Tigers defence, the ball rebounded off a post and Theo Fages reacted quickest to touch down.

But they will feel they should have collected more points during that period, especially when the tide began to turn in Castleford’s favour.

The Tigers produced a classic Wembley try right out of the top drawer when good hands released Peter Mata’utia down the right, and he kicked perfectly for Evalds to follow through and finish.

Nine minutes later Cas were in again, this time Gareth O’Brien producing the measured kick and Trueman out-jumping Fages to score underneath the posts.

The half finished with Powell’s men still on the front foot but they started the second by being pegged back by Roby’s disputed try.

Video referee Chris Kendall took several looks before deciding there was no knock on and the ball didn’t hit the touchline before Roby followed through to finish a bouncing kick. Tigers fans also felt that Regan Grace jumped from outside the field of play before touching the ball.

But the try stood and Saints then found a more authentic route to the line when Tommy Makinson finished a crisp handling move by diving over in the corner.

Lachlan Coote missed the difficult conversion but slotted a penalty when Mata’utia was pinged for taking out Mark Percival as he chased a kick through.

Another Coote penalty made the gap eight points, and as the heat took its toll on 34 heroic players, sub Kyle Amor forced his way over to secure Woolf’s second trophy in charge after last year’s Grand Final win.