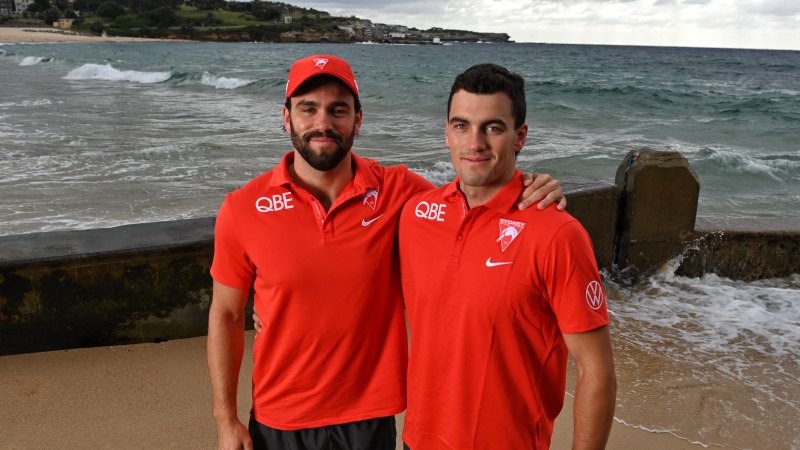 There is a reason the task of locking down the AFL’s best key forward combination on the game’s grandest stage is hardly one to daunt the McCartin brothers.

Paddy McCartin plays with his destiny in his own hands. Eight concussions seemed as though they would end the former No. 1 draft pick’s career, forcing him to walk away from the game little more than two years ago before his stirring return in Sydney this season.

His little brother Tom McCartin, at the time the youngest player on an AFL list, once took a gamble on himself and left school a year early to chase his dream at the Swans.

Suddenly the prospect of silencing Geelong Cats spearheads Tom Hawkins and Jeremy Cameron – who finished equal third in the Coleman Medal hunt – in a grand final at the MCG seems a little less intimidating.

Especially for a pair of brothers who grew up in Cats territory and specialise in self-belief.

“I always thought Paddy was going to [make a comeback from his break due to concussions], because that was the one thing he never lost in himself. He always had self-belief,” Tom McCartin said. 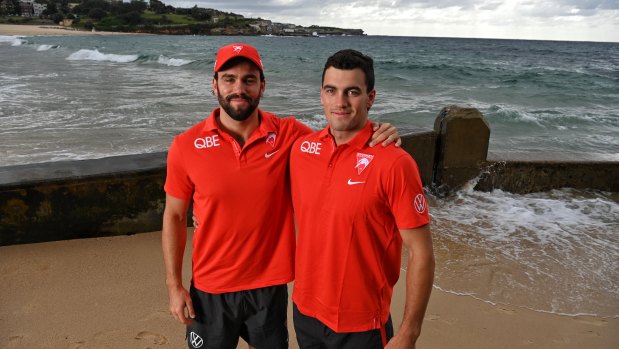 Paddy and Tom McCartin are about to play a grand final together for Sydney.Credit:Nick Moir

“I knew how much he was struggling at times … But he always told me he was going to try to get back. I just knew he was going to. It took a couple of years, he came up to Sydney and played VFL and slowly made his way back.

“We spoke about it after the game on the weekend and kind of said, ‘If you had a crystal ball 12 months ago and said we would have been playing in a grand final together, you would have been shocked’.

“He’s been through a pretty rough journey, the fact he has played every game this year and is into a ‘granny’ is really exciting. At the same time it’s only the start of his journey.”

Together, the McCartin brothers, and a man Tom labels his mentor in Dane Rampe, are tasked with shutting down arguably the best key forward duo in the competition.

Hawkins and Cameron finished the regular season with 59 goals apiece this season, establishing themselves as a vital cog in a Geelong machine that has won 15 games in a row.

Yet they may have met their match in this Sydney trio. Tom McCartin has held Hawkins to four goals in their past three match-ups, the most recent coming in round two when Paddy McCartin pulled off seven intercept marks. As for Cameron, the veteran sharpshooter has managed just five goals in his past five meetings with Rampe, twice being held goalless.

“Dane Rampe is still my mentor. I was a forward when I first got here but I was always playing on him in match sim and he taught me a few lessons early on,” Tom McCartin said.

“I’m a defender now and he has really taken me under his wing. He’s been awesome as a mate and as a mentor. I’m very lucky to have him.

“I guess no one really knew what to expect at the start of the year but the way it has all panned out is awesome. We’re very grateful.”

September 22, 2022 Rugby League Comments Off on Specialists in self-belief: The gamble of the Swans’ McCartin brothers
NFL News