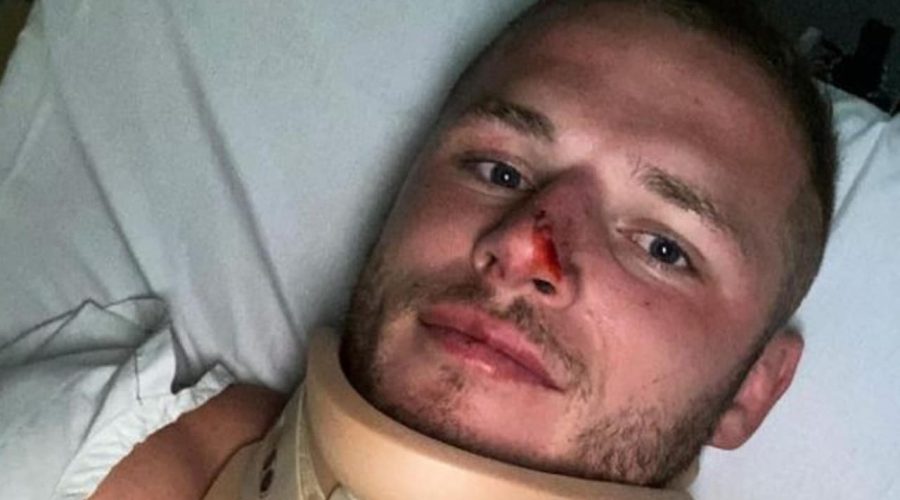 During the second half of the 26-18 defeat at AAMI Park, the 28-year-old landed awkwardly onto the turf after attempting a tackle, ending up sprawled the deck in immense discomfort.

The English prop was attended by trainers and, following a lengthy delay, taken off the field in a medical cart.

On Friday morning, Burgess informed his 144,000 Instagram followers that he was “all good”, despite having the spend the night in a neck brace.

“Hey guys, thanks for the messages of concern, I’m all good,” Burgess posted to social media.

“CT scans have come back clear but have to keep this lovely thing on till the morning to rule out any serious nerve damage which can only be seen from an MRI scan.

“Could be a long night in Melbourne here but would rather be safe than sorry! How good the footy is back eh.”

“He’s got a pretty stiff neck, and his arm doesn’t have all the strength there at the moment, but the doctor doesn’t think it’s too bad, more of a burner-type situation,” Bennett said.

Great news with all scans on Tom Burgess coming back clear, discharged from hospital this morning. Considered a severe burner (nerve pinch), has pulled up well today and as hoped is expected to be fit for the Rabbitohs in Round 2

Bennett also hit out at his senior players for going missing in the Rabbitohs’ season-opening loss to the defending premiers, accusing them of taking the “easy” option.

“That first half was awful. After that you are just doing the best you can.

“We never gave ourselves a chance. We came out and were full of errors, whether that be handling or defensively.

“It comes back to attitude – and it wasn’t there was it?”

The 71-year-old conceded the premiership hype around Souths could have gone to the players’ heads.

“Maybe it was a bit of hype, but there won’t be any hype around them now or in a week, so that will be good,” he said.

“Melbourne just wanted it more than we did.”

The Rabbitohs will next face the Manly Sea Eagles on Saturday, March 20th at Brookvale Oval.