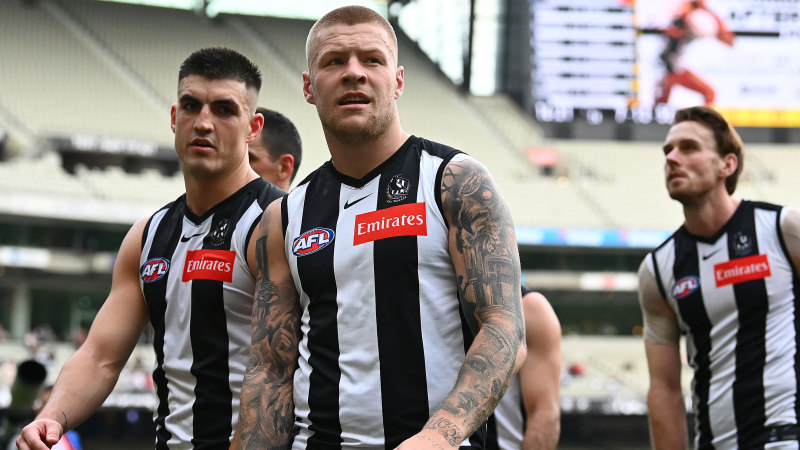 Collingwood’s leaders put the acid on star Magpie Jordan De Goey to match the huge expectation that surrounds him with performance after the club’s poor showing against the Gold Coast on Saturday.

De Goey had 16 disposals and laid just one tackle but his effort off the ball when chasing or moving into defensive positions was well below what was required for a player of his experience in a team with eight players who had 22 games or less experience. 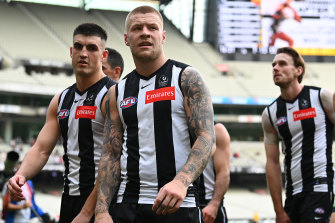 Jordan Do Goey’s teammates challenged him to lift after a loss to Gold Coast.Credit:Getty Images

With the midfield feeling the loss of prime mover Taylor Adams through injury and the forward line lacking energy and drive without Jamie Elliott, senior players made it clear immediately after the game they were disappointed he did not grasp the opportunity to show the way in their absence.

The senior players have not absolved themselves from the disappointing performances either, accepting they should be performing better too, but they see in De Goey a player with rare talent who needs to prove he deserves the opportunity to fulfil his desire to spend more time in the midfield.

The message was delivered informally, with club sources also saying there was an acknowledgment internally that De Goey’s output on Saturday may have been inhibited by a lack of football, following the knock to the head he copped against West Coast, which forced him out of the Anzac Day clash.

But club sources said the next month presented him with a great chance to prove his worth as an elite mid-forward.

While all the focus has been on the coach Nathan Buckley in recent weeks as speculation continues to rage as to whether he should be reappointed for 2022, the senior players also know a lift is needed from more than one player and spoke post-game about the need to support the inexperienced players during this lean patch.

“We’re throwing them to the wolves a little bit and we’re not supporting them as much as we’d like to,” Buckley said post-game on Saturday.

In recent weeks, as the burden of responsibility in the midfield has fallen on two premiership veterans, Scott Pendlebury and Steele Sidebottom and exciting young talent Josh Daicos, who has been among the Magpies’ best in the past fortnight, the need for De Goey to join the leaders in driving standards is clear.

De Goey, who signed a two-year deal at the start of the season, has also expressed a desire to play in the midfield but has not put in a strong performance in that part of the ground since 2018 when he played mainly as a forward but was also capable of being an explosive presence in the centre square.

He has been compared externally to Richmond’s Dustin Martin and Melbourne’s Christian Petracca but his performance – even withstanding injury interruptions – has never reached their level.

Last year’s best and fairest winner, Adams, who has been watching on while recovering from injury, has been in a good position to observe from the sidelines the efforts of players when Collingwood does not have the ball and both he and Pendlebury are strong drivers of standards within the playing group.

Geelong made a much more formal pitch to champion Cat Gary Ablett at the start of 2007 to fulfil his talent and he never looked back.