Greater Western Sydney's troubled campaign has taken another turn for the worse with former skipper Phil Davis ruled out for the rest of the season.

It came as star pair Josh Kelly and Zac Williams and much-improved midfielder Harry Perryman staked their claims to return for the Giants' crucial clash with Melbourne on Saturday night. 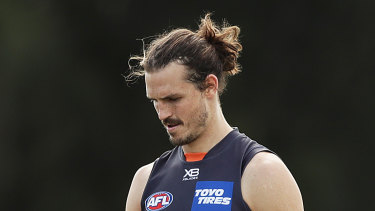 Phil Davis has been ruled out for the rest of the season. Credit:Getty Images

With games to come against Fremantle and Hawthorn, 13th and 16th respectively, the Western Bulldogs are well placed to make up the 0.9 per cent gap needed to edge past the Giants if both sides finish with the same number of wins.

The toll of this extraordinary year is starting to tell on the Giants, who have steadily fallen out of favour since being installed as premiership favourites in the early rounds.

They will not be able to turn to their wise old owl in defence Davis, who flew home to Sydney on Wednesday after finally succumbing to bone bruising in his right knee, which has plagued him for much of the season.

The Giants say the issue flared up while he was recovering from a medial ligament strain in his left knee suffered in round 10 against Essendon and missed two games. He has not been able to train since.

Davis underwent a scan last week and will need at least eight weeks of rest to manage the injury, effectively ending his campaign. The foundation Giant, who is contracted for 2021, will also undergo minor surgery on the iliotibial band in his right knee.

"Phil has been managing this injury across this season but unfortunately it’s reached the point where only a long period of rest will fix the problem," Giants football boss Jason McCartney said.

"With that in mind, it was decided that it's in Phil's best interests to return home to Sydney to be with his partner and family and he’ll undergo minor surgery in the coming days.

"Phil's an incredibly important part of our line-up, so it’s disappointing for us on-field but this is the best option to make sure he’s fully fit for the 2021 season."

Kelly (concussion), Perryman (calf) and Williams (Achilles) all trained on Wednesday while their teammates completed recovery. The latter duo trio had been close to playing in Adelaide but the five-day break cost them.

Giants coach Leon Cameron was furious with his underperforming star-studded midfield after they were "obliterated" by the Crows.

The Giants lost the contested possession count by 28, leaving their defence under siege, unable to weather a 26-49 inside-50 tally.

The possible returns of Kelly and Perryman will boost the Giants' on-ball brigade, but it has performed below par for much of 2020.

"Our clearance work and our contested brand has been at the forefront of our last four years," Cameron said.

"That hasn't been there since we resumed play in round two. We lost our hunger and we lost our hunt around the contest. We've got it back in patches but we haven't had it consistently.

"It's not good enough. Our midfield, again, let us down."

September 9, 2020 Rugby League Comments Off on Season over: Davis done for 2020 in fresh blow for Giants
NFL News