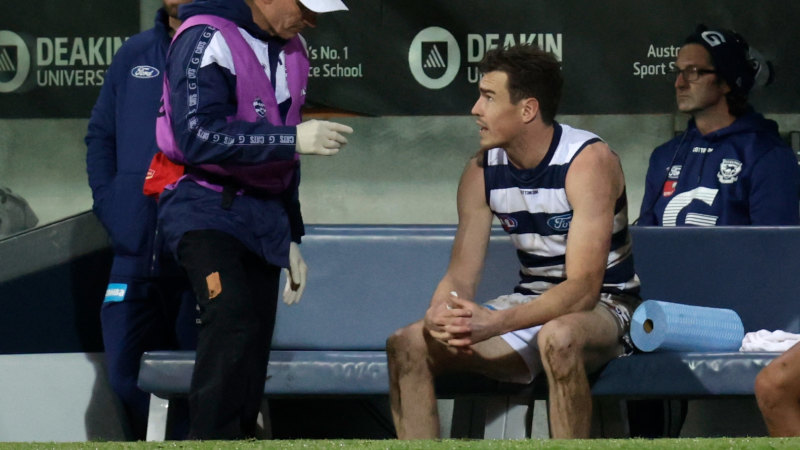 Cameron went into the game with hamstring tightness and was ultimately subbed out of the game before half-time, succumbing to tightness low in his right hamstring. 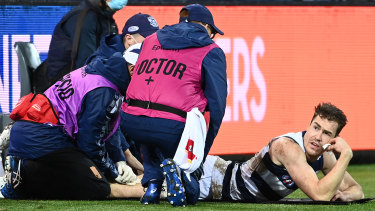 Scott said a corked buttock on the same leg complicated the injury, but he was hopeful the former Giants spearhead would be fine to train and play next week ahead of a clash with Carlton on Saturday.

“It was a little bit complicated by the fact he got a cork to that similar area … up near his glute,” Scott said. 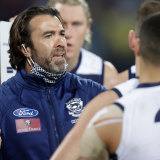 Cats coach Chris Scott addresses his players in the clash with the Bombers.Credit:Getty Images

“His tightness was right down low in the hamstring. He felt that it was tight, no real incident, so the medical staff are confident he hasn’t done a real significant injury, but it was not getting better so in combination with the knock, the tightness, the call from the medical staff up the line was he shouldn’t go on.

“They’ve got really difficult decisions to make, but they’re the experts. They don’t need to defer to a coach who has no idea what he’s talking about.”

Scott defended the decision to play him in the first place, despite Cameron feeling tight in his hamstring pre-match. The star forward booted three goals before he took himself off the field in the second term.

“We took a long time to bring him back into the AFL team,” Scott said, adding he was unable to verify whether Cameron’s two other hamstring injuries this year were related. 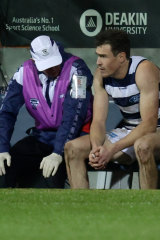 Jeremy Cameron was subbed out of the round 16 game before half-time.Credit:Getty Images

“But his hamstring has been fine. Even the way he played today … he was the best player of all-time if he had a significant injury and was doing what he was doing.

“The one criticism I’ll make is, and this goes for our conditioning staff as well, they [our fitness staff] are probably overworked and under-resourced with the number of players we have and the challenges, but I’ve got so much admiration for them, the hours they put in, the commitment to their job, and then they’ve got to make these brutally difficult decisions with key players.

“The last thing they need is me speculating on what they should or shouldn’t have done post-game before I’ve got all the information.

“I would not be surprised at all, based on what I’ve heard, that he’ll be fine to train this week and play but if there’s something there that means there’s some risk then we’ll need to assess that and spend a bit more time on it.”

Brownlow medallist Patrick Dangerfield was back to his best against the Bombers with 38 disposals, eclipsed only by Darcy Parish who took out the Tom Wills medal for best afield in the loss. 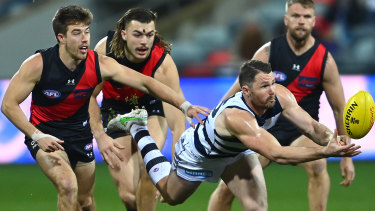 “I think it speaks to how difficult the game is that even champions of the game like Pat can’t just walk back in after eight weeks off and ankle surgery, a compromised year or so with a groin injury, and just be at the peak of their powers,” Scott said.

“That’s not the way the game operates.

“I think it was really good for him, and for us, that he looked he was a bit more himself tonight.”

Scott said the coaches discussed the impact Parish was having on the ball, but were comfortable with Dangerfield running loose too.

“We had planned for Mark O’Connor to play in the midfield so that was a late reshuffle and then [Zach] Merrett has been such a good player as well,” the Geelong coach said.

“[But] I thought two of the better players on the ground were Parish and Dangerfield and it wasn’t by accident they were next to each other a bit.”