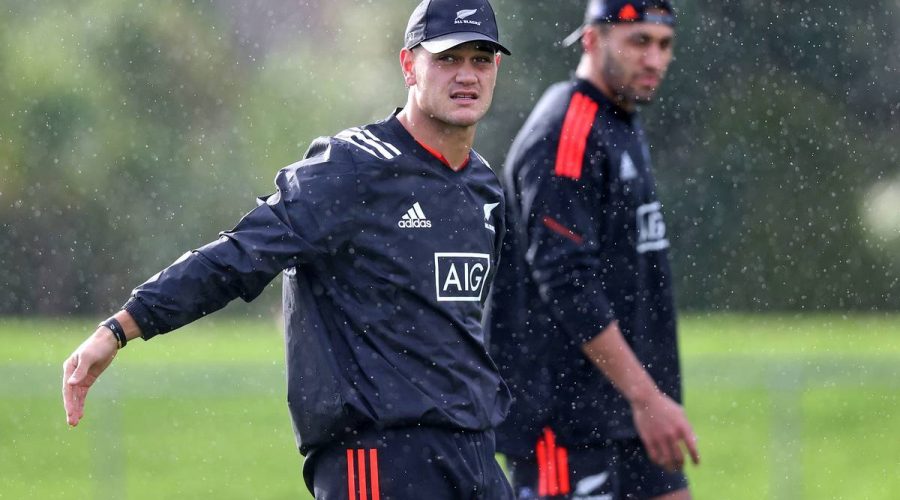 All eyes on Quinn Tupaea.

Four rookies in the first All Blacks squad of the year sprinkles intrigue into Saturday’s mismatch against Tonga at Mt Smart Stadium.

Of the debutants – Crusaders flanker Ethan Blackadder, Blues halfback Finlay Christie and Crusaders prop George Bower are set to come off the bench – Tupaea’s rise will capture interest from the outset after being named to start inside Rieko Ioane in another new-look midfield.

With David Havili given one more week to recover from a niggly calf issue Tupaea has travelled at the speed of light from the Chiefs to the Māori All Blacks squad to starting at No 12 for the All Blacks in the past fortnight.

“It’s been a bit of a crazy two weeks going into the Māori side and then coming in here,” the 22-year-old Tupaea said. “I’m super grateful and excited to be in this environment and to start is going to be something special.”

Tupaea has benefitted from Chiefs teammate Anton Lienert-Brown’s minor elbow surgery that will keep him out of the first two tests of the year but All Blacks coach Ian Foster made it clear the rookie earned promotion.

“He’s always been on the radar,” Foster said. “Clearly there’s a couple from last year that aren’t here and that’s given an opportunity. We’ve been delighted with him. He’s come in and trained well.”

Foster pointed to Tupaea’s carrying strength and instinctive offloading abilities but noted stepping up to the test arena would be a learning experience.

Given his rapid ascent Tupaea should be overawed yet he was instead a picture of calm.

“I’ve grown my confidence from last year with my ball carrying ability and on defence,” Tupaea said of improvements he’s made. “I’ve been working more on my defence; making reads and solid tackles.”

In a squad notable for Aaron Smith’s absence, with Brad Weber handed his first test start, Richie Mo’unga retains the reins at No 10 as expected with Beauden Barrett to make his return to New Zealand rugby from the bench.

Foster detailed the reasoning for this selection while outlining the chief playmaking role is up for grabs.

“He’s been playing in New Zealand this year at that intensity so that gives him the nod for this game,” Foster said of Mo’unga. “Beauden we’ve been following him a lot in Japan and been pleased with what we saw but there’s still a lift when he comes back so it gives him another week of training with us before we make the next assessment.”

Ardie Savea (knee) and Shannon Frizell (ankle) have not trained fully since finishing their Super Rugby campaigns which made loose forward selection more straightforward with Akira Ioane, Dalton Papalii and Luke Jacobson having the first chances to impress. Blackadder will cover seven and six from the bench.

Foster labelled Papalii the standout loose forward this season. The Blues openside played 12 minutes of test rugby last year but with captain Sam Cane sidelined following pectoral surgery until the end of year tour, the floor is now his to own.

“I’m stoked, baffled to be honest,” Papalii said. “When I was growing up the seven jersey was locked in by a couple of greats of the game with Richie McCaw, Savea and Sam Cane. They’re legends of the game so I’m happy to go in there and get amongst it.”

After impressing at the Chiefs prior to his red card that prematurely ended his Super season, Damian McKenzie claims the fullback role ahead of Jordie Barrett for his first start there since the draw with the Wallabies in Wellington last October. McKenzie is joined in the back three by Will Jordan and George Bridge, who returns from a horror injury run.

With Brodie Retallick, Havili, Smith, Nepo Laulala, Codie Taylor, Savea, Frizell, Sevu Reece, Tupou Vaa’i and Ethan de Groot not featuring the All Blacks have plenty of firepower to call on for the first of two tests against Fiji in Dunedin next week.

Tonga, conversely, appear on a hiding to nothing after naming 13 debutants and calling up some players, including starting lock Don Lolo, who have not played the highest level of New Zealand provincial rugby.

Such is the disparity in quality and depth, the TAB is giving Tonga a 79.5 point head start.

Dane Coles is, however, having none of suggestions Tonga will be a walkover.

“It’s a test match,” Coles said. “I know a couple of those boys; I’m good mates with Mateaki [Kafatolu] the blindside flanker from Petone. I know his mindset, he’ll be pretty pumped up to take a few of our heads off.

All Blacks team to face Tonga: