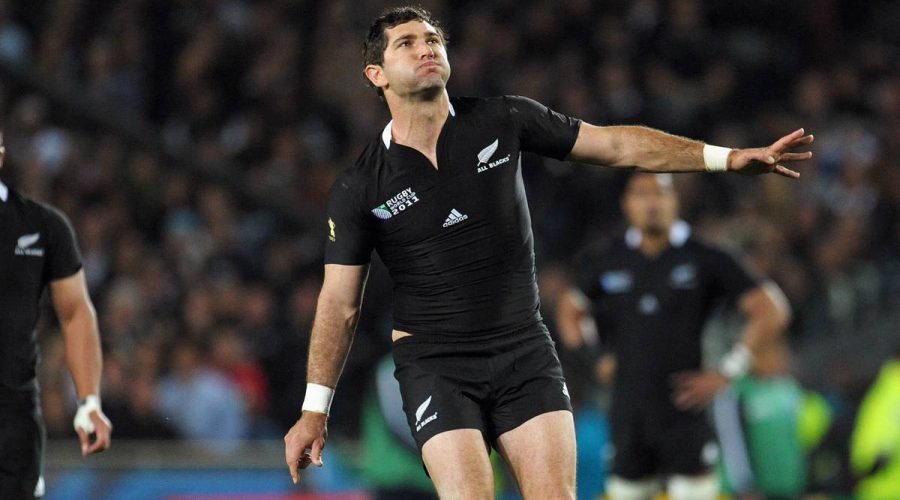 Former All Black first-five and World Cup legend Stephen Donald has revealed the public backlash he endured before his fateful 2011 World Cup campaign – criticisms he says even made him hide from the New Zealand public.

Donald was the hero for the All Blacks in the final kicking the penalty goal that ultimately separated New Zealand and France in a tight decider, which ended the former’s 24-year Webb Ellis Cup drought.

Injuries to Dan Carter and Colin Slade prior to the final, and Aaron Cruden during the first half, paved the way for the man nicknamed ‘Beaver’ to step in and command the 10 jersey for the final 46 minutes in Auckland.

The match made Donald a national hero, but it wasn’t that long before he was ridiculed for his performances in the black jersey, none more damaging than the loss to the Wallabies in the fourth Bledisloe Cup test in Hong Kong in 2010.

Donald replaced Dan Carter in the 61st minute to see out that match, and with his side up 24-19, failed to kick the ball out and instead into the hands of the Wallabies with under a minute to play.

Speaking on Sky Sports’ Playmakers: Rugby Stories, Donald says tags such as ‘choker’ and being accused of never deserving to wear the black jersey cut deep.

“I’ve never been the most talented person but I worked hard to get to where I got to be an All Black,” Donald says.

“I thought, ‘apart from Dessie (Dan Carter), I am the next best 10 in this country for a long period of time, I should be here’. That’s why I felt I should’ve been there. When people start saying you never deserve to be an All Black, that cuts you.

“Then the choker thing, that really hurt me because I pride myself that when kicks need to go over, kicks went over. The thing about the Hong Kong thing that irks me from a personal point of view is I missed the goal kick 15 in from touch, 20 odd out that would’ve buried the game anyway, so I know everyone harps on about the miss touch but it’s that goal kick that guttered me the most.

Donald made his All Blacks debut in 2008 and emerged as a staple in the team until the end of 2010 working behind Carter on the depth chart. He was promoted to number one in the first-five ranks when Carter jetted off the France for a minor playing stint at Perpignan in 2009.

Open wounds prior to the 2011 tournament healed when the All Blacks finally had their hands on the World Cup trophy again with Donald emerging as a key figure in the victory.

The now 37-year-old says that match allowed him to “walk the streets of New Zealand” and get his life back.

“It just opened up my life again and allowed me not to have a hoodie on in summer and go to the supermarket, go to the pub in peace.

“People always say ‘what has it meant to you?’ Obviously it opened up a lot of doors, this and that. The most important thing is it got me a way of life back again and allowed me to have a bit of freedom in New Zealand again, really.”

The 2011 final ended up being Donald’s final run-out in the black jumper, finishing up with 23 tests caps and 98 points.

April 15, 2021 Rugby League Comments Off on Rugby: All Blacks cult hero Stephen Donald opens up on criticisms he endured prior to 2011 World Cup heroics
NFL News