This is one of those games you can’t help but get excited about.

Two teams with the same goal, but very contrasting styles going head to head on the Friday night stage.

While Richmond might be the reigning premiers, this is Geelong’s premiership to lose.

The Tigers have proven themselves to be the best team of the past few years, but on Friday night they face a side with the most talent who are putting it altogether as a team at the right time.

I’m not worried by the Cats' recent finals record.

Since Chris Scott took over as coach, Geelong are 4-11 in September, but many of those games were with very different personnel.

And let’s not forget they led the Tigers by 21 points at half-time of last year’s preliminary final, without Tom Hawkins.

But even compared to last year, Scott’s men look stronger in so many areas. 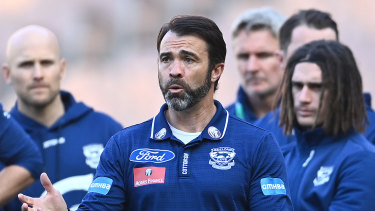 For the past few seasons, they’ve been crying out for more support for Patrick Dangerfield, Tom Hawkins and Joel Selwood.

Despite the loss of Tim Kelly, the work of Mitch Duncan, Cam Guthrie and Sam Menegola has increased my confidence in the Cats.

Duncan, in particular, had already proven himself as a more than just a handy support act.

But this year, they’ve elevated their games and are taking lead roles more often. It’s saying something that the absence of Selwood and Gary Ablett jnr has been little more than a hiccup.

There’s also still improvement in the likes of Jack Steven and Luke Dahlhaus.

I thought Josh Jenkins offered something in the ruck against Essendon, and despite the Cats' smaller forward structure, Esava Ratugolea could still have a role to play in finals against a team like West Coast.

Crucially, they’re healthy and there is a real depth that wasn’t always available in the past, and I’ve always believed it’s not the superstars who win you grand finals – it’s the guys between 18 to 22, the final players selected in your side, who do.

Scott has options to fill those final spots.

That’s without even saying a word about the Cats' defence. Lachie Henderson was seemingly on the scrapheap, but he and Harry Taylor are a rock-solid duo with a great understanding.

Mark Blicavs has proved he play key back, or just about anywhere, while Zach Tuohy has gone from a career-defender to a wingman and sometimes midfielder.

There’s a flexibility about this Cats team that few others possess, and Scott must get some of the plaudits for that.

They pick their moments, probably better than anyone.

But, while you can take Richmond’s game style to the bank, under Scott, Geelong have the ability to adapt to their opposition better than anyone else.

It will be an intriguing tactical battle with the Cats’ control against the Tigers chaos. Everyone knows how the Tigers play, but that doesn’t mean you can beat them.

It’s also interesting looking at how the Cats have rebuilt their list since claiming the premiership in Scott’s first season as coach back in 2011.

Only a few players from that great Geelong side remain, and they’ve managed to regenerate on the run.

Since Scott took over, Nakia Cockatoo has been the Cats' only top-10 pick, at pick 10 back in 2014 and he has struggled for continuity due to injury.

Their first-round picks from last year are yet to play and while Jordan Clark has showed promise, he’s yet to cement a place in the Cats’ 22.

In many ways, Hawthorn’s attempt to turn over their list while staying in contention hasn’t been all that different, it’s just Geelong’s list management team has been able to identify a number of diamonds in the rough and the club has developed them well.

There’ll no doubt be further comparisons between Dangerfield and Dustin Martin on Friday night.

He’s never been a bad field kick, but I think Dangerfield’s kicking has improved dramatically and while his explosive style often gets likened to Martin, Dangerfield is more of a bull.

In many respects they’re quite different players.

Both can win clearances and go forward to kick goals, but Dangerfield is a genuine inside/outside midfielder.

Despite Martin’s obvious strength around the ball, the Tigers seem to like setup ‘Dusty’ more often on the outside to use his kicking as a weapon.

Dangerfield and Martin might cross paths, but I’d expect they’re more likely to shake hands and meet at the end of the game than spend any meaningful time on each other.

He probably wouldn’t say it publicly, but I reckon Danger would certainly be envious of Martin’s premierships.

The great forwards of the 90s Tony Lockett and Jason Dunstall always used to keep tabs on what each other were doing.

This is a different rivalry, as we edge closer to finals, Dangerfield has the chance to prove he’s more than Martin’s equal, just as the Cats could soon add to their incredible modern record.

September 10, 2020 Rugby League Comments Off on Richmond might be reigning premiers, but this is Geelong’s premiership to lose
NFL News