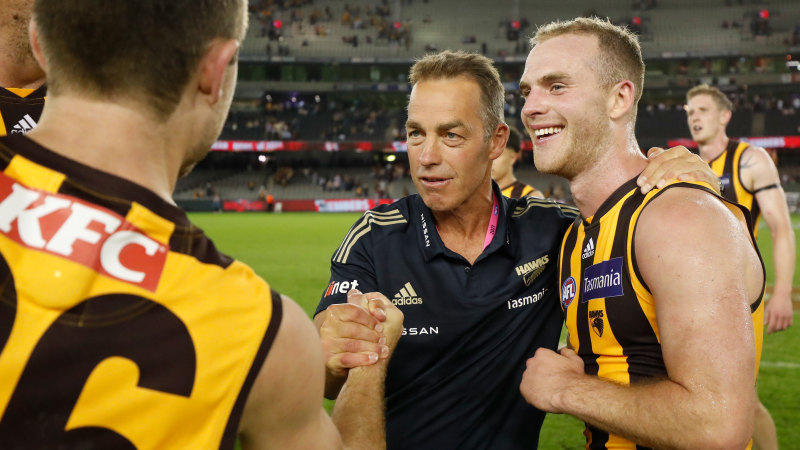 Fewer tackles and more free-flowing chains of possession were a feature of round one of the season, according to a comparison of key statistics with previous opening rounds.

It’s a small sample and too early to judge how the AFL’s rule changes will shape the season, but the league’s official data partner, Champion Data, provided a snapshot of the round, compared with opening-round matches from 2016 onwards, which suggested the changes are having the desired effect – opening up the game.

Scoring was also higher than for round one of the past two seasons. 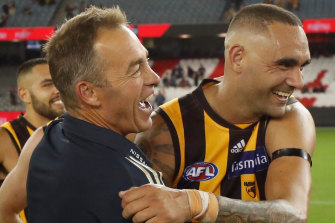 Hawks coach Alastair Clarkson, left, celebrates after his side beat the Bombers on Saturday. Credit:Getty Images

The AFL, in a bid to bust congestion, introduced the new player on the mark rule for the 2021 season, along with cutting rotations to 75 per game and extending quarter length back to 20 minutes.

The player on the mark rule dictates that the person standing the mark cannot move at all, as opposed to being able to move across their line to cut off their opponent’s passing and running angles.

“I think it’s a greater spectacle, with the chance to score more heavily,” Hawthorn’s four-time premiership coach Alastair Clarkson said after his side beat Essendon on Saturday night.

“The game became much, much easier to be orientated around defence rather than attack and that was compounded even further last year when it made scoring seem like an extravagant soccer game really, scores of eight goals to six.”

The statistics back up Clarkson’s hunch. The game has become less congested and therefore it has looked more open at this early stage.

Getting the ball from one end to another in a single ball movement chain became terribly hard over the past decade because of defensive-minded coaching, and has led to “ugly footy”. In round one this season (before the GWS v St Kilda and West Coast v Gold Coast games were completed) teams were able to rebound from their defensive 50 into their forward 50 on 30.3 per cent of the occasions they tried.

The statistics also showed tackles were down, stoppages (throw ins and ball ups) were down, contested possessions were down and scoring was up on 2018 and 2019.

Adelaide coach Matthew Nicks suggested this more open footy and players being more fatigued due to lower rotations may have played a part in Taylor Walker’s return to form, the big man kicking five goals.

“Maybe the man on the mark rule is opening the game up slightly and allowing more ball use [like] hitting short lead-ups? And Tex’s [Walker] weapon is the ability to challenge his opponent leading up to the footy.”

Geelong coach Chris Scott was more cautious than Nicks and Clarkson in his assessments.

“I understand the rationale in making the game harder to play, that maybe it will make it a little more open,” Scott said after Geelong’s loss to Adelaide.

“It looked hard for both teams and that’s what I have seen a little bit across the last couple of weeks.

March 21, 2021 Rugby League Comments Off on Revealed: the numbers that show footy was a ‘greater spectacle’ in round one
NFL News