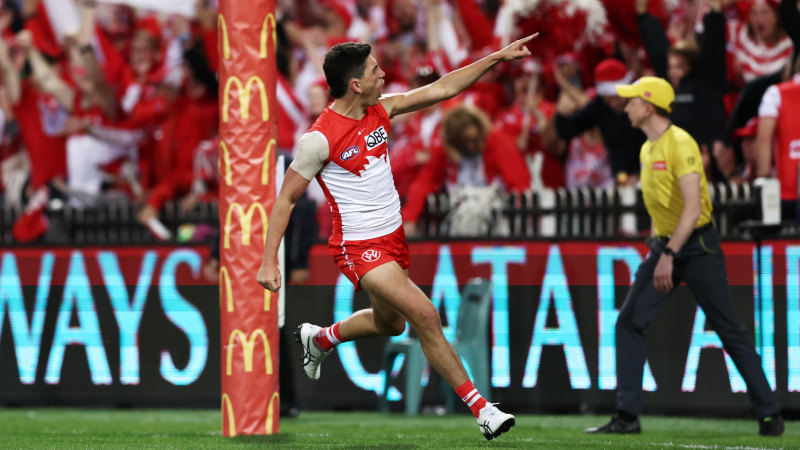 Justin McInerney reckons he and his brother broke about 20 windows when they were young.

“Dad used to send a rocket up us every time we broke one,” the Sydney Swans midfielder said. “We always used to try to hide it but that was always the worst thing. He used to not care too much if we told him, but once we tried to hide it for a few weeks, that’s when we copped it.”

But now the Swans are grateful for that broken glass – and a few blow-ups from McInerney’s father John – because it helped shape one of their straightest kicks as they prepare for an AFL grand final.

McInerney missed a Tuesday training session due to foot soreness but the 22-year-old has been named – as has in-doubt Sam Reid – to face the Geelong Cats at a heaving MCG on Saturday.

In the stands will be McInerney’s parents, his older siblings Christopher and Rebecca, and several old schoolmates who have wrangled a ticket to watch the speedster on the game’s biggest stage.

“We used to have some fun in the backyard, me and my brother,” McInerney said. 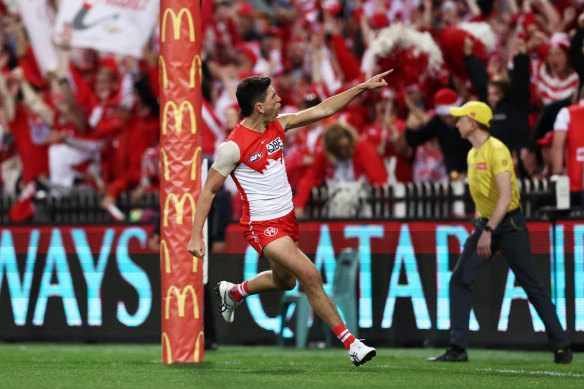 Justin McInerney celebrates a goal against the Magpies at the SCG.Credit:Getty

“We did get pretty competitive, we used to take the footy with us everywhere and just tackle each other on the bed or outside on the grass. We would have broken about 20 windows I reckon, in our time. We used to play together as juniors a couple of times. He’s been there for my whole journey.

“From when I was about 10 to 16, me, my brother and my sister would have gone to about four [grand final parades]. We used to love it, going down there to see the boys run down. Even the stuff during grand final week out the front of the MCG, we used to go to all of that stuff.

It’s somewhat fitting he was a Carlton supporter. McInerney was born with the umbilical cord around his neck and “came out blue”, so goes the story he told his Swans teammates before his AFL debut in 2019.

Fast-forward to this week and McInerney is a Swan, a crucial part of the young brigade – featuring James Rowbottom, Errol Gulden, Nick Blakey and Logan McDonald – which has revived Sydney during a nine-game winning streak that has led to the last Saturday in September.

Who knows if they would be here without McInerney’s stunning intercept mark and goal in a one-point preliminary final win over Collingwood last week, picking off a Darcy Moore kick intended for Jeremy Howe and booting a goal to bring Swans fans to their feet.

McInerney is no stranger to being thrown in the deep end, having moved from Melbourne to Sydney to launch his career. That was a reality check for someone who “wouldn’t have done anything when I was a kid; no washing, no cooking, none of that”.

It meant he had to rely on his Swans teammates like no one else. McInerney says some among the younger crew hardly spend a minute apart, which would make Sydney’s first flag in 10 years all the more special.

“We joke about it a bit with Errol and Logan that they came in and it’s just all been winning. We played finals last year and finals again this year. When myself, Nick Blakey and Rowey first got to the club, we were fourth-last and third-last, so it wasn’t all sunshine and rainbows,” McInerney said.

“To get here now, it’s a credit to the staff, the club and the coaching group. There’s the players we’ve got around the club, Parksy [Luke Parker], Ramps [Dane Rampe], and even Joey [Josh Kennedy], even though he’s not playing this year, he has had a massive impact on our careers. It’s just incredible we’ve come this far and we’re in a grand final, it’s amazing.”