Newcastle star Kalyn Ponga is free to chase a spot at the 2023 Rugby World Cup despite recently extending his Knights contract until 2024. 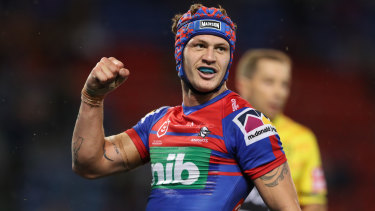 Kalyn Ponga will become a free agent on November 1 next year.Credit:Getty

"I'd be really surprised if the All Blacks weren't talking to him now, that's the kind of talent we are talking about here," Gardner said.

"He could play for the All Blacks, the Wallabies, or he may end up going to Japan or Europe. We genuinely want the best for the young man and while ever he wants to play rugby league, we want him to play here at Newcastle in an environment he enjoys.

Ponga was adamant his focus was on winning a premiership for the Knights when he held a press conference to announce his extension five months ago.

"It's no secret I want to win a comp in Newcastle, I want to hold the trophy up here," Ponga said at the time of his re-signing in June.

"There was a lot of talk in the media about rugby union but I've always said I'm focused on the Knights and have been since I walked in the door."

All Blacks legend Sir John Kirwan told the Herald in February that Ponga faced an uphill battle trying to crack it into an already established New Zealand team with just one season under his belt before the 2023 World Cup.

"I don't think he could do it in one year," Kirwan told the Herald in February. "It would be high risk on his part. He could take that risk if he wants, but this All Blacks team has some guys who are pretty big competitors and like to succeed. I think he needs two years. He's got nothing to lose. A two-year contract and if it doesn't work out he can go back to league.

"This has nothing to do with money. For guys at this level, what I've realised is that they want a different challenge. I believe that's what Kalyn wants, and if he wants to have a crack then it won't be about money. He's got the ability man, for sure. He's got the ability, he just has to decide which position and I think he's more a 10 or a 15."