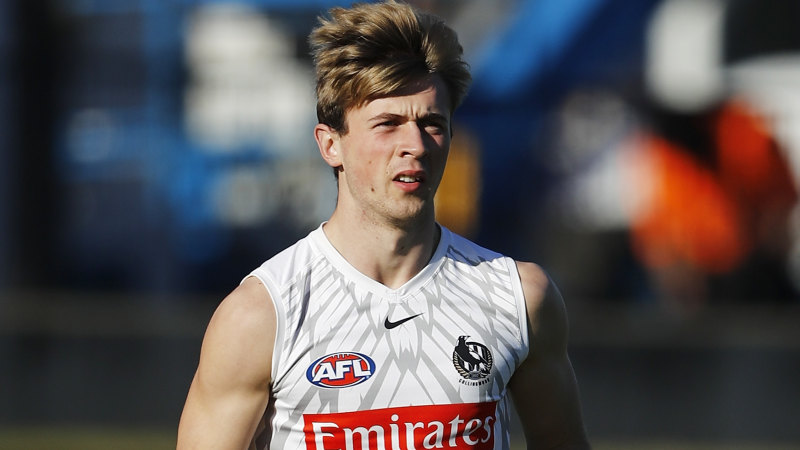 Collingwood will name two more debutants in their side to face Port Adelaide on Friday night, with Jack Ginnivan and Anton Tohill confirmed for their first appearances at AFL level.

The selection of Tohill and Ginnivan, confirmed by interim coach Robert Harvey on Thursday and reported by The Age on Monday, will mark the debut of Collingwood’s eighth and ninth players for 2021. 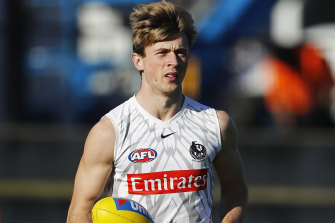 Tohill is a versatile 200-centimetre prospect who will play in defence while Ginnivan is a small forward. The Irish rookie Tohill joined the club from County Derry in 2018 while Ginnivan was taken in the 2020 rookie draft from Strathfieldsaye, near Bendigo.

“It was a great moment to see his [Tohill’s] reaction to that,” Harvey said of a video showing the coach telling the players they would debut. “And the players’ heartfelt feeling for him, because they know how hard he’s worked for this, and how much he’s sacrificed to be here with us.

“He’s worked so hard on his game. He’s a very smart individual. He’s a medical student in waiting when he gets back to Ireland.

“The respect he’s earned from us internally has been enormous. We’re rapt for him.”

Ginnivan has kicked a couple of four-goal bags in the VFL this season.

The pair come in with Collingwood facing a stack of injuries out of their disappointing loss to Carlton last Sunday. The five-day break to Friday’s Port Adelaide game is also unhelpful.

Josh Thomas (concussion) and Callum Brown (shoulder) are out, the latter for the season, while Brody Mihocek (abdomen) and Will Hoskin-Elliott (back) face tests at training.

The game was set to be played at Adelaide Oval but because the Power could not get clearance to train or play during South Australia’s lockdown the decision was taken to move both the Crows and Port Adelaide to Melbourne.

Harvey has actually played international rules against Tohill’s father, Anthony, who was captain of Ireland in the ’90s.

“I just know he was fast. It was at Croke Park. He was running away from us pretty easily. I know he had speed,” Harvey said.

“I was lucky enough to have a beer with him after. It [selecting his son to debut] is one of those moments I suppose you get where [you appreciate] the world is small.”

Harvey said the Pies would focus on continuing to move the ball well as an area of improvement.

“We’ve moved the ball pretty well the last two weeks in the back two thirds of the ground,” he said. “Last week our entries were just not good enough in the first half. We want to work on that going forward. The last 40 minutes of the game we got overrun with contest and pressure.”