Follow all the action from Friday’s West Coast-Collingwood clash with our live blog from 7.30pm

Collingwood have dropped key forward Mason Cox for Friday night’s clash against the Eagles as they look to kick start their season after their upset loss to the Giants last week.

The 30-year-old was in reasonable form in the previous two rounds but had a poor match against the Giants when he struggled to win a contest and did not kick a goal. 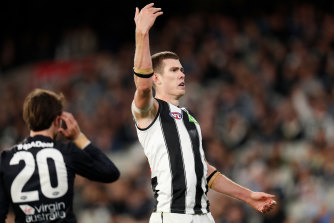 Magpies coach Nathan Buckley flagged some changes after the game with the inability to win contests forward of the ball one of the main areas of concern.

Cox played his best game in 2020 in the elimination final win against the Eagles when he kicked three goals in five minutes in the first quarter to give the Magpies the jump on their opponents.