They are the random acts of kindness that sum up Marlion Pickett's attitude towards life. Pickett is a dual premiership player after just 20 AFL games, with Saturday night's grand final win for Richmond yet another chapter in his scarcely believable tale of redemption and emergence.

Pickett is unflappable on and off-field, and his generosity of spirit shone through on a couple of occasions in grand final week.

One came when he was out for dinner on the Gold Coast and approached for a selfie by a fan.

"One fella asked for a photo, so we took a photo out there," Pickett said on Monday.

"We started talking and stuff. He's going through a really hard time at the moment about him and his partner having a big fight. He got kicked out of his house. Has two kids. I was talking to him, trying to make him feel a bit better. Just to make sure he was all right and work a way through it. He was a really nice guy to talk to. I don't like leaving people that aren't in the right state of mind by themselves, especially when they're going through a hard time."

Pickett got his new acquaintance's details and plans to keep in touch. 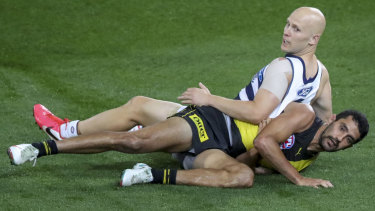 "I messaged him the other day, just before the granny to check if he was all right and stuff like that. I'll probably message him this week just to see how he's going.

"I'm always there for someone if they need talking to. It doesn't matter if I know you or I don't at all."

The other instance came when Pickett was asked by friends if he could help with spare grand final tickets. This is a man with four kids and on a COVID-19-slashed rookie wage, but there was no thought of him asking for recompense.

I'm always there for someone if they need talking to. It doesn't matter if I know you or I don't at all.

"The people that were coming from Darwin wanted to pay for them but I don't really like selling things to people, if I'm not using them and I don't need them. It makes me feel better just to give them away.

"One of them is like an old mate. He asked if he could buy them off me and I said ,'Nah, don't worry about it. I'm not using them and I'm not going to trade you for something I never paid for so just take them.'

"I'm not the kind of person to overcharge for tickets that are hard to come by."

Pickett, 28, is set to remain at Richmond for at least another couple of seasons with a new contract imminent.

Having won his second AFL flag on Saturday he has kept things low-key ahead of a return to Western Australia on Wednesday where he will be reunited with his unwell father.

"I know it's a big game and what not but it's just another game. I haven't really been celebrating, I've just been with my family and enjoying time with them. Just probably a bit of family time after a good win. The kids have been struggling a bit. It's time to get them out and about," he said.

"[Dad's] all right. Struggling every now and then but doing the best he can do."

It is only 17 months since Richmond recruited Pickett in the mid-season draft despite a finger injury. Having spent time in prison during his youth, his restorative tale has been part of football legend since his grand final day debut last year.