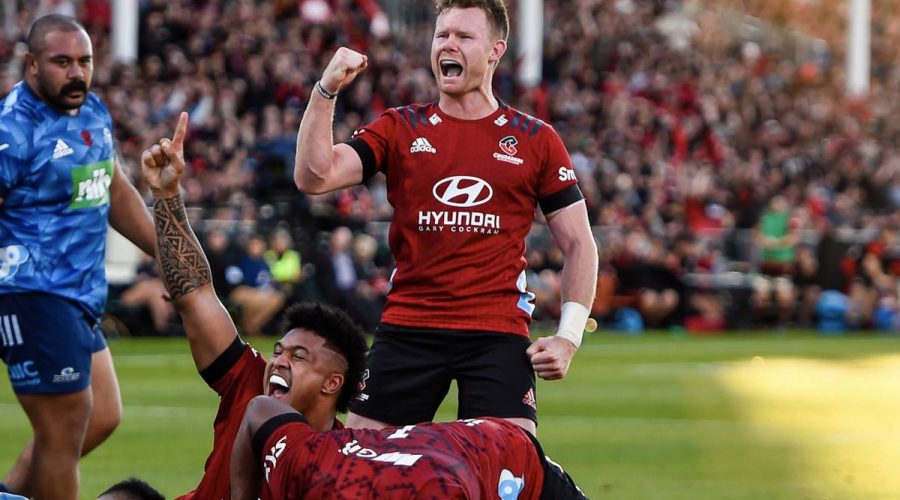 Five talking points from Super Rugby Aotearoa, and inside a conspiracy theory.

SO, ARE THE BLUES TOTALLY TOAST?

Yeah, nah, well actually yeah, but they could salvage some pride at least.

Bizarrely, despite some concerning ill-discipline that cost them dearly, the Bluesdidn’t lose 29-6 in Christchurch because they were so bad. It was just that the Crusaders were so good.

The Blues did supply, in Dalton Papalii, the standout loose forward, in a high-class field. In fact, if it hadn’t been for another stunning performance from Crusaders’ lock Sam Whitelock, I’d rate Papalii the best forward in the game, regardless of position.

Do the Chiefs still start next Saturday at Eden Park as hot favourites? Certainly. But if the Blues can find a way to utilise their strike weapons, like Rieko Ioane and Caleb Clarke out wide they could win.

But be warned, only people who live a life of unicorns and lollipops would bet big money on that.

IT'S LIFE JIM, AND JUST AS WE KNOW IT

Put away any doubts that the Crusaders aren’t still hot favourites to again win Super Rugby Aotearoa when they play the Chiefs in the final in Christchurch on May 8.

Their Anzac Day 29-6 victory over the Blues was marked by all the traditional virtues of the southern men.

Clinical execution? Check. The 58th minute lineout drive for Codie Taylor’s try was inevitable as night following day from the moment he threw the ball in to Ethan Blackadder.

Stifling defence? Check. In Rieko Ioane and Clarke the Blues have two of the best attackers in world rugby. They were targeted so successfully they couldn’t make one big break between them.

Shrewd, quick thinking? Check. When Richie Mo’unga wasn’t dictating play, David Havili, who may be the most underrated player in New Zealand, probed, passed, and kicked to huge effect.

HE IS THE REAL DEAL

Having raved last week about Will Jordan it was gratifying to see him score a sensational try in just the fourth minute in Christchurch, somehow shrugging off four tacklers in a sinuous, stepping, elusive 25-metre run.

In some ways just as remarkable was how he managed to get his hands under the ball and save a try to Hoskins Sotutu, and somehow stopped a rampaging Akira Ioane with a one-on-one tackle.

Jordan’s warp-speed fast, he thinks just as quickly, and he certainly doesn’t lack for courage. One day we may all look back on 2021 as the year he became a permanent fixture in the All Blacks.

IN THE COW SHEDS OF KIWITAHI THEY WERE APPLAUDING

The fairytale revival by the Chiefs was starting to look a little like something from the Grimm brothers on Friday night in Hamilton until referee Paul Williams called a penalty for the Hurricanes’ front row collapsing.

(I understand those who felt that as the ball was available to the Chiefs in their back row, play just should have gone on. As someone with 78 first cousins, the majority of whom live in the Waikato, I’d probably say this anyway, but Williams signalled penalty advantage so quickly I genuinely think he was obliged to award the penalty.)

Not since Stephen Donald kicked the All Blacks to World Cup glory has a penalty being taken by a Chiefs player felt so stressful, and so vital.

So hurray, and good on ya, and go you good thing to Damian McKenzie, who stuck to all his procedures, including confident little smile, before booting his team home, 26-24.

FORTUNATELY, REDEMPTION CAN BE JUST ONE RESTART AWAY

Bryn Gatland, as likeable and grounded a player as you’d find in the game, had a start in Hamilton that basically defined the word nightmare. In the opening minute he missed touch with a clearing kick. When the Hurricanes ran the ball back, he couldn’t stop runaway lock James Blackwell, who stormed on for a try. At the restart Gatland’s kick was out on the full. Two minutes gone, and to a lesser man the glass wouldn’t have been so much half empty, as drained, and dashed on the ground, where you cut your foot on the shards.

Gatland, on the other hand, buckled down, didn’t make another mistake, and early in the second half pressured the Canes on his own kick through, then darted in for a try from the scrum he’d forced. Good guys, it’s clear, can be winners.

IT'S NOT A CONSPIRACY, IT'S JUST THAT NOBODY HONESTLY KNOWS WHAT'S GOING ON

Chris Rattue has made an impassioned plea for the anonymous heroes in the tight five to get more praise and attention. He wrote, “Rugby is a game which involves a lot of pushing and shoving, yet in watching it for 50 years, I can’t recall a commentator ever revealing who is actually good at pushing and shoving and why. But that’s rugby. The public needs to keep its nose out of matters which don’t concern them.”

I agree the unknown battlers deserve more glory. But there’s actually no dark plan to keep fans ill-informed. If you’re on the sideline you can’t really tell what’s happening. Hell, a lot of referees, at touching distance next to the scrum, don’t even really know.

One of the best refs New Zealand has ever had, Paddy O’Brien, controlled his first provincial game in 1988, and by the end of 1996 had refereed six test matches. (Before O’Brien’s first Ranfurly Shield game in ’93, between Auckland and Horowhenua, Auckland and All Black hooker Sean Fitzpatrick kindly said to him, “If you need any help, just ask.”)

But get this. O’Brien (already six tests into his career remember), says he actually only found out what really happens in a scrum in 1997, at a Sanzar seminar in Perth, addressed by Steve Hansen, at that stage the forwards coach of the Canterbury side.

In Bob Howitt’s 2004 biography of O’Brien, Howitt writes, “Paddy admits that, probably like many other referees, he was hugely ignorant of what was happening in the darker recesses of the front row.” O’Brien said that many times he “pinged a front rower without having the vaguest idea of what had happened.”

What hope do us mere commentators have?