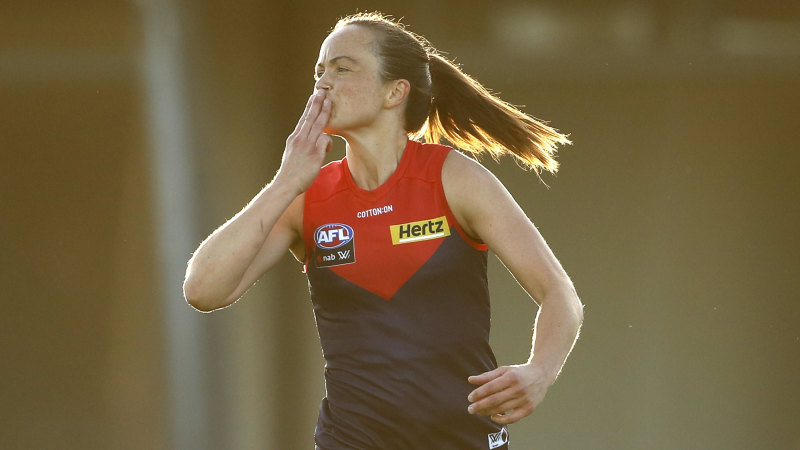 It was a one-sided contest at Casey Fields on Saturday night, the Demons doing their best to remain in touch with the top six after a 40-point win over a sloppy St Kilda side. 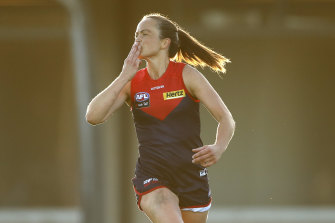 Last time they met, the Saints had their first AFLW win and after consecutive losses, Melbourne were keen to get the job done. The Saints sought redemption after a 53-point loss to dual premiers Adelaide last week.

Demons skipper Daisy Pearce opened the scoring with a set shot followed by an assist and goal from Alyssa Bannan, the Saints failing to notch an inside 50 before the first break.

The Saints managed to wrangle the ball to their end in the second but failed to hang onto it, a set shot from Shelley Scott extending Melbourne’s lead.

In her 30th AFLW game along with teammate Tilly-Lucas Rodd, Nat Exon announced her return from injury with their only major for the half, her first goal for the Saints. Last year’s Demons leading goal kicker Tegan Cunningham upped their score to 27.

All-Australian Lauren Pearce did the heavy lifting for Melbourne, leading with 14 possessions at the first half and continuing her dominance, with 22 on the final siren.

The Dees’ goal inaccuracy from recent weeks was on the improve, standout performer Eden Zanker escaping a tackle to hand Daisy Pearce her second goal, followed by Bannan also notching her second. Demon Jacqueline Parry extended it to a 38-point lead into the fourth quarter.

Young Demon Eliza McNamara slotted one before Claudia Whitfort celebrated her first AFLW goal to get the Saints up to 15 points. But St Kilda got going too late; Tamara Luke gave another to the red, white and black but one off the boot of Demon Kate Hore and the Saints went marching back to RSEA Park with a lot to think about. 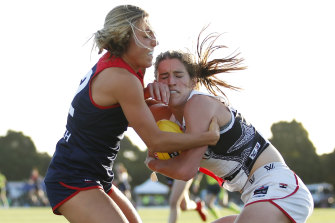 Former Lion Kate McCarthy returned for the Saints after being sidelined with concussion. Melbourne made two changes in Brenna Tarrant and Lauren Magee while Sinead Goldbrick and Meg Downie sat out with hamstring and ankle injuries respectively.

Tyla Hanks starred for the sixth week in a row for the Demons, with 22 disposals. The 21-year-old Hanks has polled coaches votes every round this season, doubling her output from last year, averaging 22 disposals, 10 contested possessions, seven first possessions, six tackles and five clearances.

The midfielder was nominated for the Rising Star Award in round two, hasn’t missed a game since debuting in 2019, and has come a long way in the past 12 months.

Earlier in the day, the Brisbane Lions continued their spectacular form against Greater Western Sydney, beating the Giants by 38 points at Manuka Oval just a week after ending Fremantle’s 11-game winning streak.