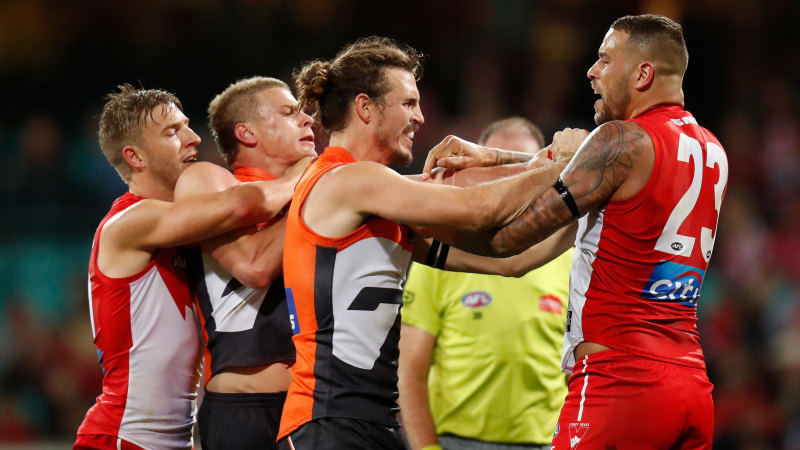 In an era of zones and team defences, player rivalries are not what they once were. If Lance v (Alex) Rance was the pre-eminent duel of the 2010s, then the battle between Franklin and Phil Davis cannot be far behind.

It’s a rivalry that has been on ice since the 2018 finals, but the two great warriors are back this weekend for what could be the final time.

The points are firmly with Franklin in the home and away season, although Davis has taken the honours in finals.

Franklin has become somewhat of a barometer in Sydney derbies since his blockbuster move in 2014, polling Brownlow votes in each of the Swans’ six home and away victories but nothing in their losses. His five-goal haul earlier this year when the Giants pinched the game late may prove the exception. The Giants have won both finals between the clubs, and Franklin was held goalless in each game.

The pair have not clashed since the 2018 elimination final when a banged-up Franklin was comprehensively beaten by Davis.

Future match-ups could be limited after Sunday, particularly if the Giants do not make it to September. Although Franklin has returned to near his top this year after being ravaged by injury in 2019-20, Davis’ rotten run has continued, playing just 17 of a possible 33 games since the start of 2020.

“It’s been a while, and who knows how long he’s got left and I’ve got left?” Davis said.

Out of contract at season’s end, Davis, 30, said he has “two, three, four more years” left, although his body may ultimately decide if he kicks on. 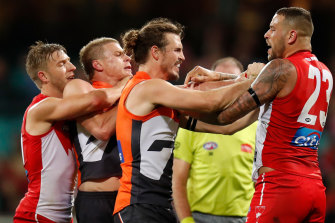 Lance Franklin and Phil Davis have not clashed since the 2018 finals. They meet again on Sunday.Credit:Getty

Davis is full of respect for how Franklin had the hunger to play on despite his considerable battles with injury.

“One part of it is the first 300 games of his career he played hurt a lot. I had a huge admiration for that, to put your body out there,” Davis said.

“He’d accomplished so much – multiple All Australians, Coleman Medals, premierships. He decided to persevere.

“It would have been easier for him to retire, because he’d accomplished so much. He’s got great resilience and that’s why he’s a champion of the game.”

In some respects, Franklin and Davis are the odd couple. One is a finely tuned athlete whose movements are smooth. Davis runs with an ungainly gait, almost as if he’s injured, but there have been few finer defenders in the past decade.

As athletic as Franklin is, Davis said the superstar forward’s football smarts were underestimated.

“He’s just such a good natural footballer. That’s what makes him such a very challenging opponent – that rare combination of physical ability and being able to read the game,” Davis said.

So who does Davis think has won the duel?

“I’d have to go through the numbers, but I’d presume it would be even, he and I,” Davis said.

“Maybe he thinks he’s got me and I think I’ve got him, so that’s a good part of it.

“It’s a nice element within the game, but the game is always shifting and moving. These days you don’t get 120 minutes one-v-one, but it’s fun being able to track back and see where you go over a long period of time.”

Meanwhile, the Giants have recalled ruckman Matt Flynn for and Xavier O’Halloran, having confirmed earlier in the week that captain Stephen Coniglio would return. The Swans could not find room for highly rated midfielder James Rowbottom and named an unchanged team.

July 16, 2021 Rugby League Comments Off on One for the road? Old foes Franklin and Davis renew rivalry
NFL News