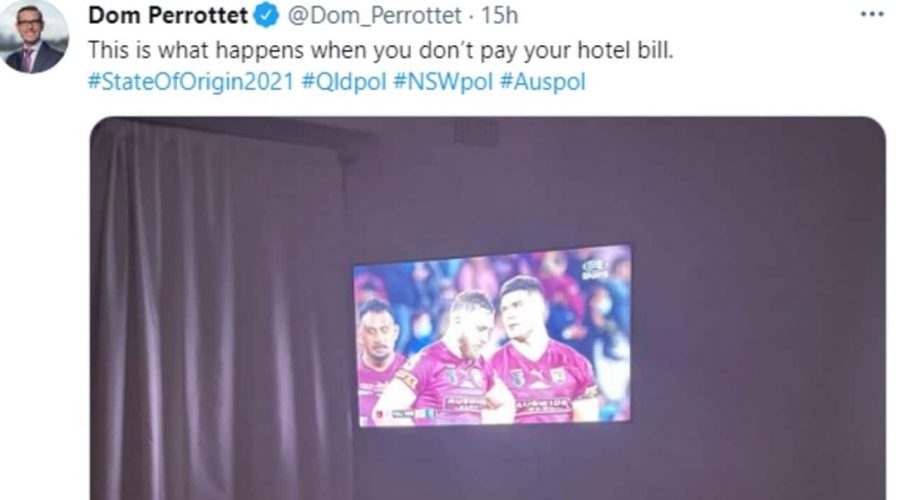 The NSW Treasurer took to Twitter to trash talk Queensland after the Maroons’ Sunday night State of Origin loss.

Dominic Perrottet tweeted a picture of a TV screen showing the game with the caption: “This is what happens when you don’t pay your hotel bill.”

The caption was in reference to a bill for hotel quarantine costs that the NSW Treasury sent to Queensland in February to demand reimbursement for Queensland travellers returning to Australia via Sydney.

The bill, for over $30 million, was defiantly ripped up by Queensland Deputy Premier Steven Miles who called it a “ridiculous” request.

This is what happens when you don’t pay your hotel bill. #StateOfOrigin2021#Qldpol#NSWpol#Auspolpic.twitter.com/8wwsibcARW

Mr Perrottet’s picture was taken in his Beecroft, NSW home.

The MP has been forced to spend more time there than usual after he was declared a close contact of a coronavirus case in May, putting him into self-isolation for a fortnight.

However, the Treasurer had a negative Covid-19 test and was not required to self-isolate this time around.

Queensland’s Maroons rugby league team lost the year’s second State of Origin game on Sunday in an embarrassing 26-0 defeat to the NSW Blues.