Wests Tigers moved into the NRL’s top six courtesy of a big win over Canterbury on Sunday, while Cronulla overpowered Manly.

Cronulla made it three wins in four games with a rare success over their great rivals.

The Sharks had lost 17 of their past 19 games against Manly but were convincing winners at Central Coast Stadium thanks to the creative class of Chad Townsend, Shaun Johnson and Matt Moylan.

Townsend finished with three try assists while Johnson and Moylan set up two apiece, with Sione Katoa scoring twice to take his tally to five tries in two matches.

The Sea Eagles were without the injured Tom Trbojevic, Dylan Walker and Moses Suli and found themselves 18-6 down at the interval, Katoa and Jesse Ramien crossing late in the half after Jorge Tafua had cancelled out Braden Hamlin-Uele’s opening try.

Three further tries in a 12-minute spell after the restart had Cronulla cruising, Josh Dugan and Katoa touching down either side of a score from former Warrington back Bryson Goodwin.

Fonua-Blake and Tevita Funa scored late consolations for Manly, who drop to eighth in the table. 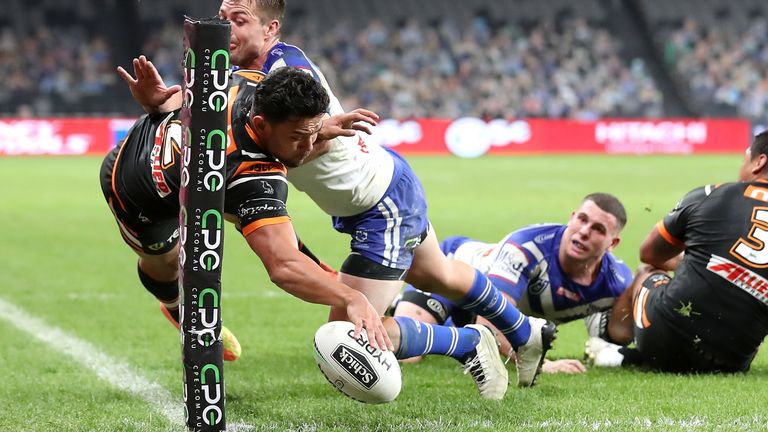 Harry Grant produced another dazzling display as the Tigers battered the Bulldogs at Bankwest Stadium.

The 22-year-old hooker, who is on loan from Melbourne Storm, scored Wests’ first try and finished with 151 metres from 20 carries, while also making a team-leading 45 tackles.

Reimis Smith’s converted try had given Canterbury the lead on 18 minutes but they didn’t trouble the scoreboard for the remainder of a one-sided contest. Grant brought the Tigers level and two tries in four minutes from Tommy Talau and Joseph Leilua gave Michael Maguire’s men a 16-6 lead at the change of ends.

Grant sent full-back Adam Doueihi over for the final try with nine minutes remaining, lifting the Tigers up to sixth in the ladder.