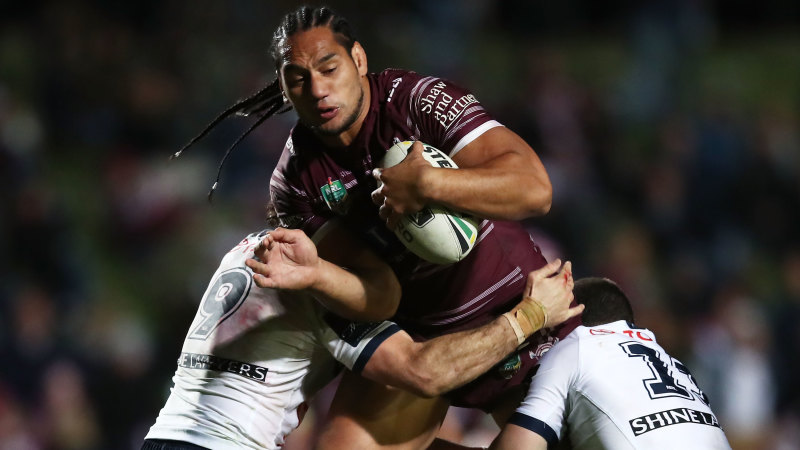 Cowboys off to a flying start

Manly has been made to pay for an early mistake. The Cowboys had an immediate crack in good field position and Murray Taulagi has made the most of it. He came down with the footy after a lovely cross-field kick from Scott Drinkwater.

The timing was kinda awkward. Just after this happened, the crowd began clapping; it was the 175th second and everyone was asked to applaud to remember Sea Eagle #175, Bob Fulton.

Final thoughts from Des as we kick off

Des Hasler was asked the obligatory question about winning without Tom Trbojevic just before kick-off.

“Tommy won’t be backing up, there will be quite a few from that game [out], it’s a fierce game, always is,” he said.

“We were aware he won’t be backing up for quite a while. We planned for that.”

Plenty of ins and outs …

Can Manly win without Tom Trbojevic? We’re about to find out.

I was tasked with doing the NSW player ratings on Wednesday night and came within a whisker of giving Tommy Turbo a perfect 10 (slight markdown for missing a tackle that led to a try just before half-time).

Des Hasler has wisely decided to rest Trbovejic given his history of hamstring dramas, although brother Jake will back up for the Blues. Another Trbojevic, Ben, will be in the side, while Daly Cherry-Evans will also back up. 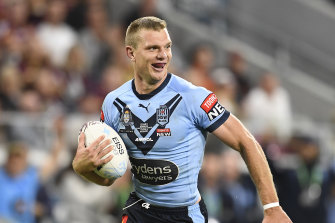 Tom Trbojevic had a night to remember on Wednesday, scoring three tries for NSW.Credit:Getty

Maroons winger Kyle Feldt won’t back up, with Justin O’Neill to replace him on the wing. Valentine Holmes is backing up at fullback.

Kurt De Luis wil debut for Manly, while Tom Deardon will play his first game for the Cowboys.

TGIF … the footy is back!

Good evening and thanks for joining tonight’s footy blog!

Yes, it’s that time of year where the NRL takes a bit of a back seat during the State of Origin period. But I’ve always loved this time of year; the footy is less predictable as the top teams attempt to maintain their ascendancy while some of their representative stars are sidelined. 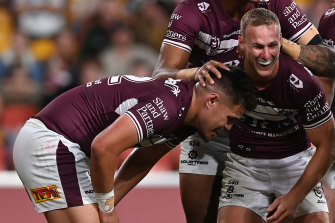 First up tonight, we’ve got Manly up against North Queensland.

This is a big occasion for the Sea Eagles, who will pay tribute to the late, great Bob Fulton. The Immortal’s wife, Ann, children Brett, Scott and Kristie, and all the grandkids will be special guests at the newly renamed 4 Pines Park (that’s a product I’m prepared to plug).

All attendees will be asked to stand and applaud at the 175th second mark of the match in memory of Sea Eagle No.175.

I covered Fulton’s State Funeral last week. A fitting farewell for one of the greats of the sport.

In the late game, Penrith will try to avoid losing consecutive games against Cronulla.

I’ll have all of the team changes and pre-game goss for you shortly.