A first-half blitz has powered North Melbourne to a comfortable 35-point victory over Richmond, as North’s midfielders ran rampant at Punt Road Oval on Friday night.

Roos ruck Emma King dominated the air from the get-go. The 26-year-old put on a first-half marking clinic with four grabs, as well as drifting forward to hit the scoreboard, kicking two goals. 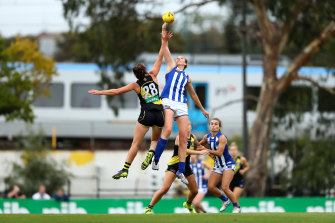 The Tigers were up against it even before the match commenced, when reigning best and fairest Monique Conti (hamstring) was a late withdrawal. It left a depleted Richmond midfield against North’s red-hot, on-ball brigade, and the Roos capitalised from the opening bounce.

The in-form Jasmine Garner combined 22 disposals with five tackles and a goal, while Ash Riddell was just as busy with 25 disposals and four marks.

“I thought our first half was our most complete football that we’ve played so far,” said North coach Darren Crocker post-game. “All of our concepts and everything we’ve worked on showed. The challenge is putting that together for four quarters.”

Richmond staged a counter-attack in the third term, keeping North Melbourne scoreless and booting their first three majors of the match to bring the deficit back to 21 points at the main break.
But the Kangaroos, aided by the breeze in the last quarter, soon reasserted themselves and kicked four final-term goals to eventually record a comfortable victory.

Prized number one pick Ellie McKenzie tried hard for the Tigers, while Harriet Cordner offered resistance in the backline with seven defensive marks.

The victory keeps the Kangaroos in touch with the top two, while Richmond remain 11th on the ladder with one win.

“Emma King played her best footy since round one. She was really important for us,” said Crocker.

The second half seemed a different game from the first, as the Tigers kicked five goals to four and suddenly looked lively. Richmond will aim to take the momentum into next week, when they fly to the Gold Coast to take on the winless Suns.