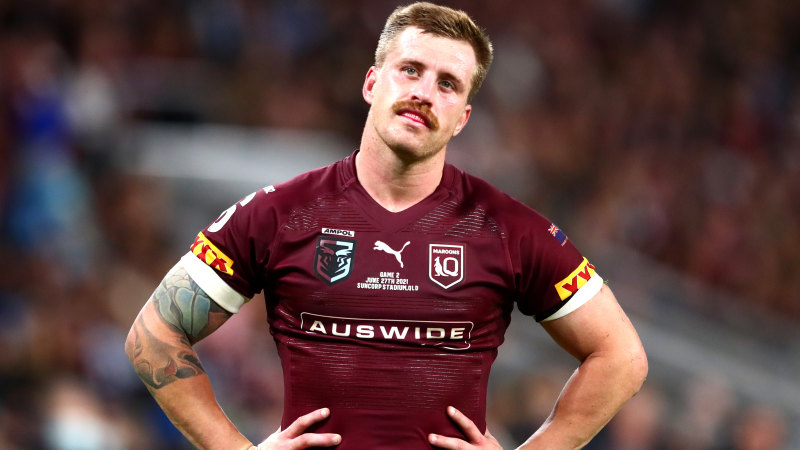 Cameron Munster may be in hot water again with the NRL judiciary after being placed on report for a dangerous collision with James Tedesco.

The Maroons star was pinged for leading with his knees in a tackle on the NSW captain during Origin II. 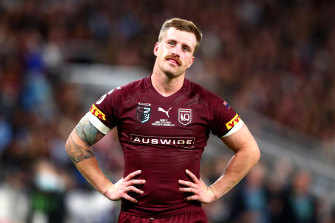 Maroons star Cameron Munster has been placed on report again.Credit:Getty

“He has to rein it in a lot,” Bellamy said. “You just can’t do that. He just needs to cut that out of his game.”

Any suspension for Munster will rub salt in the wound for Maroons after Sunday night’s 26-0 loss.

Christian Welch refused to blame the defeat on the 36 hours of chaos leading into the match and said his side had a big task ahead for game three.

“It shouldn’t take a bad loss to be motivated to play for your state,” he said. “Experiencing as a kid the joy this team can deliver to the people of our state every Wednesday night and the couple of days of school and workplaces, you do feel it personally when you come away 2-0.

“There will be a lot of disappointed kids, families and adults who would have loved us to win.”

After the match, Xavier Coates revealed the whirlwind 24 hours that led to him being thrust into game two.

Coates said he got a call from high performance manager Joe McDermott at 10.30pm on Saturday night while he was in bed. He was told the side was having issues around the eligibility of Ronaldo Mulitalo.

“He asked if I was prepared to play tomorrow night if worst came to worst and I said I was,” he said.

“I came into training [on Sunday] for the Broncos and wasn’t sure if I was to train or not. But then Kevvie [Walters] told me just to sit back and not to train just in case and I ended up getting the call-up.”

Despite being on a bye week, Coates said he was still doing his own sessions and was prepared to play.

“As a professional footy player, it’s my job to always be prepared if worst comes to worst and I was prepared, but obviously the result [on Sunday was] not a very good one,” he said.