Brownlow medallist Tom Mitchell says he would welcome the chance to become Hawthorn skipper and believes he is one pre-season away from returning to career-best form.

In his first season back since he was sidelined last year because of a broken leg, Mitchell has played in all 15 matches, averaging a team-high 25.4 disposals per game. 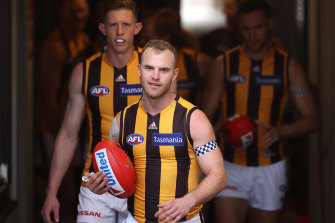 Returning from such a nasty injury is hard work, and not always understood by supporters focused only on winning matches.

"Even I would say six to eight months after I broke my leg, I was still in pain just walking, I still had a bit of limp and things like that," Mitchell said.

"But from there, I didn't really do a pre-season because I was just in rehab mode and coming into this season a bit under done. To play every game this year, and not missing a training session either, I have started to build some strong continuity so that is a promising sign."

Mitchell had the top role in Stratton's absence against St Kilda on Sunday and had a team-high 27 disposals.

"I have definitely enjoyed the opportunity with Stratts' absence. We have been pretty depleted, at times, this year with leaders. Guys like Isaac Smith, James Sicily, Stratto, the last little bit, obviously, Ben McEvoy didn't play on the weekend," Mitchell said.

"I have really enjoyed the opportunity and relished the opportunity to step up in a leadership sense and try and lead from the front with my actions and also help the young players both on field and off field in their development plans to get better."

Stratton, 31, has been captain for two years but the Hawks may opt for change ahead of what could be an off-season of upheaval where they will have a rare high draft pick and are likely to be busy through the trade period.

"I just want whatever is best for the club. If I am the right person to lead us forward, I would love that and be more than happy to do it," Mitchell said.

A tough season has only got worse for the Hawks when James Worpel, the reigning best and fairest, hurt his shoulder in the loss to the Saints and is likely to miss the final two matches, against the Western Bulldogs in Adelaide on Sunday and the Gold Coast in Adelaide a week later.

This came after Worpel was seen having strong words with Mitchell at half-time, an incident the former Swan was quick to brush off as a sign of "passion".

"We actually had a good laugh about it after the game. That's pretty common for players to have those sorts of conversations. If anything, it's a good thing," Mitchell said.

"I think our fans would see it as a sign of passion and something that we see a lot with James Sicily. We are trying to get things right. I think that is just a reflection of what that was. Obviously, it is disappointing to see 'Worps' go down with his injury.

"We haven't had a lot of opportunity to play together yet. Obviously, his emerging season last year, was the season I was out. So, we are always figuring out ways to gel and we are still figuring that out."