The NSW assistant coach has been in camp all week working alongside new Blues halfback Mitchell Pearce, who has replaced the injured Nathan Cleary for the decider against Queensland at ANZ Stadium.

PEARCE IN OUR TIME
State of Origins are never won because of one player, but the player who will be watched more than any other tonight is Mitchell, who has been recalled into the team at the age of 30.

He has reached that part of his career when the lightbulb suddenly goes off. He’s had a multitude of coaches at every level telling him from an early age how to play the game. 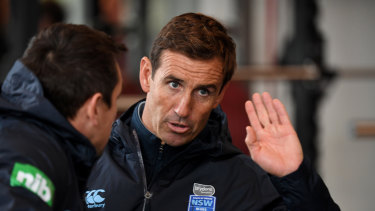 What has struck me this week at training is how much Mitchell and five-eighth James Maloney still have such a strong understanding of how each other play.

They won a competition together at the Roosters in 2013 and the strong bond formed between them back then is evident on the training paddock now. Both have dominant voices. Both know what the other will do.

I won’t give Mitchell too much advice before he runs out. He’s ready to go. He knows what’s expected of him. Whether he knows it or not, he’s been working his whole life towards this moment.

START ME UP
So here we go: The Decider! It’s all on the line. The first 20 minutes is critical in all big games but more than ever in one like this. 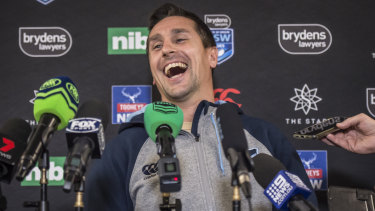 Relaxed: Pearce’s demeanour this time around is in marked difference to previous Origin series.Credit:Wolter Peeters

You can work all week on set moves and plays that isolate and expose a defender. But you need to make them tired enough to clock off and make a bad defensive decision. You have to wear them down and that’s why the start is so important.

In the first game, Queensland completed over 90 per cent of their sets in the first 20 minutes. The big challenge for them is trying to reproduce that effort again but this time away from their home turf, before 80,000 Blues fans, in a deciding match.

Queensland have lost troops because of injuries but NSW looks like a really well-balanced team.

Around the ruck is the real threat, starting with the speed of Damien Cook and then James Tedesco. In game one, they punched holes in Queensland but we didn’t capitalise on the many opportunities they created.

In game two, Cook picked his times. He was patient. It’s what we call “running smarts”. People say, ‘Oh you should run more’. It’s not about running more but running at that right times.

BEWARE THE WOUNDED CANETOAD
This is exactly where they like to be. This is what the Maroons feed on.

I know what the tone of their camp will be: nobody gives us a chance, we play for each other, all that kind of stuff. Nobody should be taking a NSW victory for granted. We haven't been.

PLAYER TO WATCH
Queensland aren’t stronger with Cameron Munster at fullback. You can never replace someone with the skill and unpredictability of Kalyn Ponga, who has been ruled out with injury. 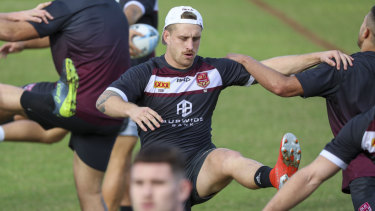 Cameron Munter at fullback will present a fresh challenge for NSW.Credit:AAP

But they are going to be different. And that’s frightening, in some ways, because Munster can pop up anywhere on the field.

He’s such a dangerous player but, playing in the halves, we knew where he’d be, on the left-side of the ruck.

We could plan for it and work our defensive systems around that: we could anticipate which plays he was going to run and which players were going to be around him. At fullback, it’s the great unknown.

THE VERDICT
NSW won game two in Perth 38-6 but I think we can find another gear. Remember, they scored all those points in driving rain.

Out wide is where NSW really troubled Queensland and, on a faster surface at ANZ Stadium, it is going to be hard for the Maroons to contain Josh Addo-Carr on the left and then handle the size and power of “Turbo” Tommy Trbojevic and Blake Ferguson on the right.

Related posts:
July 9, 2019 Rugby League Comments Off on Mitchell Pearce has been preparing for this match his whole life
NFL News