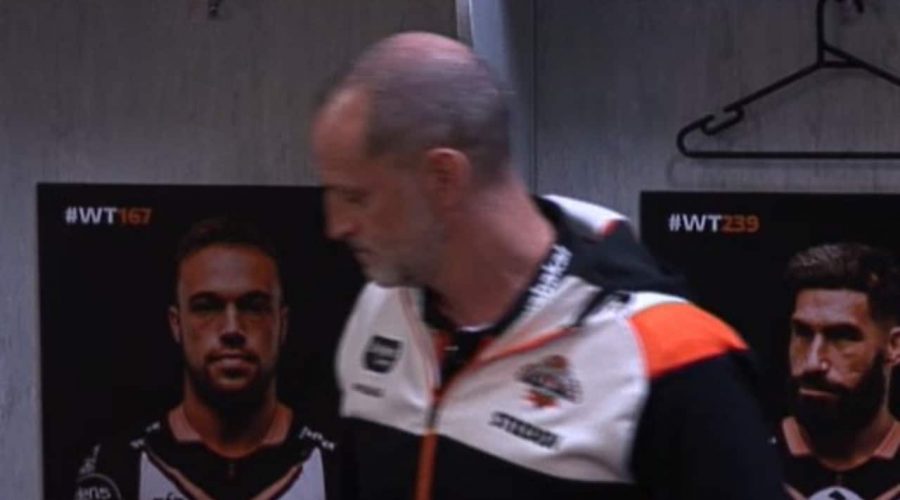 Wests Tigers coach Michael Maguire joined the club to try and instil a new culture of toughness in 2019 but in his third season at the club, it doesn’t seem to be working.

Sure there are moments of where the club wants to be, but then there was Saturday night’s 66-16 thrashing against the Storm.

While the Storm are the front runners of the competition, seemingly excelling in the wake of Cameron Smith’s retirement, no one would have expected the result on the Sunshine Coast.

The Storm raced to a 30-0 lead after 17 minutes and the Dragons’ 91-6 win over the Bulldogs in 1935 looked under threat as the biggest ever win in Australian first-grade rugby league history.

It was 40-0 at halftime and Maguire had nothing to say.

Having been famous for his sprays over the years, Maguire left the furniture intact but gave the side a halftime address that would hit harder than anything else.

The Storm were ruthless.Source:Getty Images

Seemingly keeping his emotions in check, Maguire stormed out of the rooms to let the players sort out the result for themselves.

“He has stormed out of the dressing room and has taken all his staff with him. He has left it to the players and he is absolutely disgusted and so he should be.”

Braith Anasta added: “Nothing he says at this point I believe is going to make a difference.

“He has left it up to the players to try and regroup and show something in the second half.

“You see him barking orders and soon you will see him and the rest of his coaching staff leave the dressing room. They leave it to the players. Sometimes you are better off saying nothing.”

The Tigers were better in the second half, but not before blowing the scoreline out to 60-0 after 51 minutes.

Three tries were little more than consolations for the Tigers but did nothing to make them feel better.

Tigers skipper James Tamou had few words to say about the result, saying that there were “underlying issues” the team needed to take care of, having been thrashed last week by Parramatta as well.

Where to now for the Tigers.Source:Getty Images

Asked about halftime, Tamou said that Maguire left it up to the players to get themselves out of the debacle that was the first half.

“I love Madge, he just said it’s up to us, we’ve dug this hole, we have to get out of it,” Tamou said. “And some of the young boys actually spoke up which was really refreshing.

“The fact is we’ve got a lot of things to sort out and it’ll take a everyone in the team to sort it out, we’re only halfway through the season so we have to pick it up.”

Tamou said at the end of the game, the infighting started with players pointing the fingers, with Tamou saying it’s up to him and the other leaders in the team to sort it out.

Ennis said that he was worried about the youngsters speaking up as it points to a leadership vacuum at the club.