Forgotten Bomber Michael Hurley is progressing in his recovery from a hip infection, but Essendon captain Dyson Heppell says the key defender won’t be ready for his side’s round one meeting with Geelong.

Hurley, 31, missed all of the 2021 season after being struck down with a hip infection last February, which doctors believe originated from a blister in his foot. 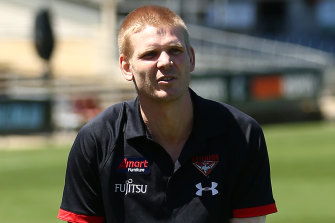 Michael Hurley is progressing from a hip infection that saw him miss all of 2021.Credit:Getty Images

But Heppell said he was looking forward to seeing Hurley back on the training track in due course.

“Particularly over the last six weeks he’s made some great inroads.

“He’ll just keep working with the fitness staff and physios, and being really diligent with his program as he has been. “We’re putting no time frame on that, obviously, but he’s in really good spirits and he seems really healthy, and he’s moving along quite well.

“I’m not sure when he’ll be back out on the track, but it’s great to see him knocking about.”

But Heppell said Hurley wouldn’t be ready for his club’s season-opener.

“[That’s] probably a bit too soon in the way he’s progressing,” he said.

“There’s no real time frame on it, honestly. He’s not putting any cap on himself, on when he can return, but it will come in due course.”

The Bombers trained at the NEC Hanger in Tullamarine on Monday but were short on staff and players, with up to 20 in isolation due to COVID-19 protocols.

Heppell said it was something all clubs would have to adapt and get used to as the season goes.

“Yeah we had a few missing today. [It’s] great to be back in action, but we were a bit thin on numbers,” he said. “Hopefully we get all of them back on deck later this week and early next week. 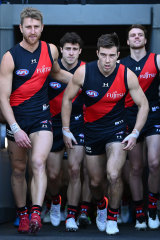 Essendon skipper Dyson Heppell says his body is feeling as good as it has in “probably six” years.Credit:Getty Images

“I’ve managed to duck and weave a couple to try not to get it, but I guess that’s the lay of the land at the moment. You just cop it. Guys have handled it really well and been really clear in protocols and taking all the measures to try and keep everyone safe and healthy here as well.

“There’s no specific measures we’re putting on ourselves, but in terms of getting out and about and trying to limit our times in high-density venues and things like that, trying to take all measures possible not to contract it. But you can see in sport across the world, the teams that are handling it the best and staying healthy are at the top of the ladder and winning.”

Heppell said he was having his best run at pre-season in a long time, and the disappointment of being knocked out in the opening week of finals would drive his team in 2022.

Asked whether it was the best his body has felt in four or five years, Heppell replied: “No doubt, that’s a fair shout, probably six [years].”

“She’s been a while since I’ve been cracking in pre-Christmas, and I’ve had a nice break and been able to train properly, so it’s nice to be back out there,” he said.

“Barring COVID, we’ve got the majority of the list healthy and training properly, so it’s good.

“I’m feeling good and hopefully it will stay that way.”

Heppell added that Ben Hobbs, Essendon’s first pick in last year’s draft, was announcing himself as a “ready-made” player.

“He lived with me for a couple of weeks – he’s horrible on the dishes and I had to show him where the dishwasher was a couple of times, but he’ll get better at that,” Heppell quipped.

“But I reckon we’ll see plenty of footy from him this year.

“He’ll bring a bit of grunt on the inside, but I think he’s got the footy smarts as well.”

January 10, 2022 Rugby League Comments Off on Michael Hurley ‘making inroads’ but won’t be ready for round one
NFL News