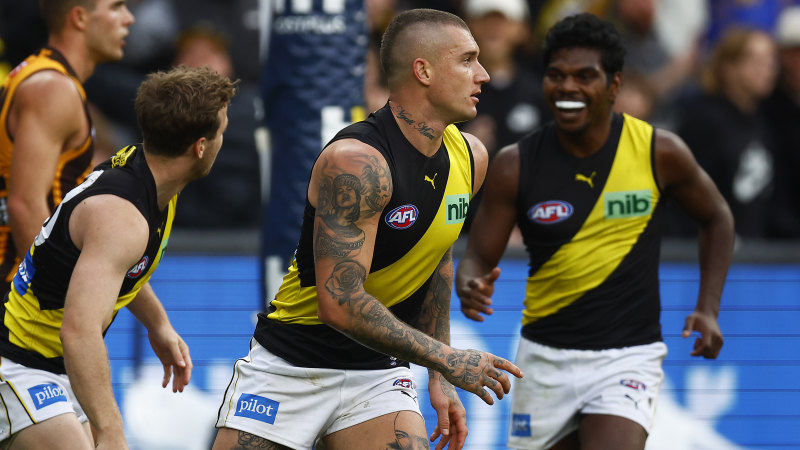 With Dustin Martin producing moments of magic for Richmond in an entertaining clash against Hawthorn, the Tigers’ recent surge continued with a 23-point win at the MCG on Saturday.

Placed under significant pressure when trailing the Hawks by 25-points early in the second term, the Tigers responded magnificently to record a third consecutive win.

It is the first time in 2022 the Tigers have been in front on the win-loss ledger and while their recent wins have come against sides unlikely to feature in September, their improvement after a slow start to the season has been impressive. 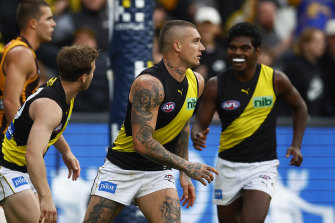 They are playing in a manner reminiscent of the furious style that saw them claim three flags in four seasons between 2017 and 2020, which is not surprising given they fielded 21 premiership players.

Richmond’s forward pressure was tremendous early, which set the tone for a trend that continued throughout the match as they out-tackled their rivals.

Toby Nankervis and Ivan Soldo were dominant in the ruck against young Hawk Max Lynch, which enabled the Tigers to win first use of the footy.

Coleman Medal leader Tom Lynch, veteran forward Jack Riewoldt and Martin revelled in attack when sharing 10 goals between them in a potent display. 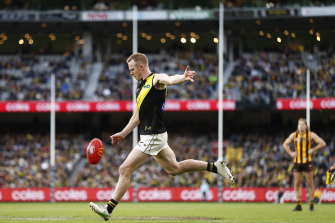 But they were ably assisted by the outstanding work ethic shown by teammates including Shai Bolton, who was as creative as he was exceptional in the pressure he applied, and Liam Baker.

After conceding the opening two goals, the Hawks responded extremely well and had the better of the next quarter to set up a commanding lead early in the second term.

But they were unable to contain a surge from Richmond that coincided with the second-quarter substitution from the match of veteran forward Jack Gunston, who injured an ankle after a lively start. Tigers defender Noah Balta injured a hamstring in the third term.

Richmond coach Damien Harwick issued a strong defence of Martin in an interview prior to the match and the Tigers champion responded with a stirring performance.

The Brownlow medallist and Richmond were criticised for declining interview requests after Martin’s return to footy last week following a sabbatical as he mourned the death of his father, Shane.

But Hardwick said the star did not need to “provide a running commentary on what it looks like and feels like to be Dustin Martin”.

“That’s not him. It is not arrogance, it is just a sense that he likes being his own man. He’s very insulated. He does not let a lot of people in,” Hardwick told ABC Radio.

Martin scarcely looks like he has missed a beat since returning to Punt Rd and produced some superb cameos as the Tigers wrested control of the match in the second term.

The best came when the 30-year-old kept his feet amid a pack to squeeze through a remarkable goal from the most acute of angles in the third term to extend Richmond’s lead to 18-points.

Had a banana he attempted after weaving through traffic earlier in the quarter snuck through, it would have topped that effort for the goal of the day.

In the last term Martin, who kicked three goals from 20 disposals, managed to set up Riewoldt for his third goal which gave the Tigers a handy buffer. 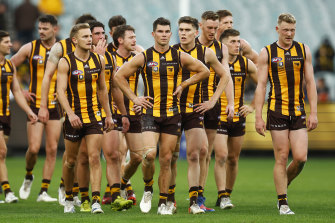 Debutants Bigoa Nyuon and Sam Butler had little time to overcome their nerves in a testing welcome to the AFL.

Butler received an old-fashioned coat-hanger from Jayden Short when running out of defence early in the first term, which prompted a fierce rebuke for the Tiger from Jaeger O’Meara.

Nyuon, meanwhile, was issued a significant challenge by Hardwick when tasked with manning the quality Hawk Gunston. 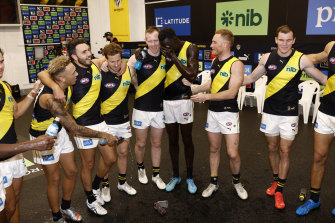 The 219-game veteran set about testing the 20-year-old and was lively in the first term when kicking a goal and setting up Luke Breust for another as the Hawks seized control early.

But the 30-year-old, who has kicked 15 goals for the season, rolled an ankle late in the opening term in what proved a clear blow for the Hawks.

Nyuon showed promise throughout the match and saved a goal through desperation in the third term with the match still in the balance.