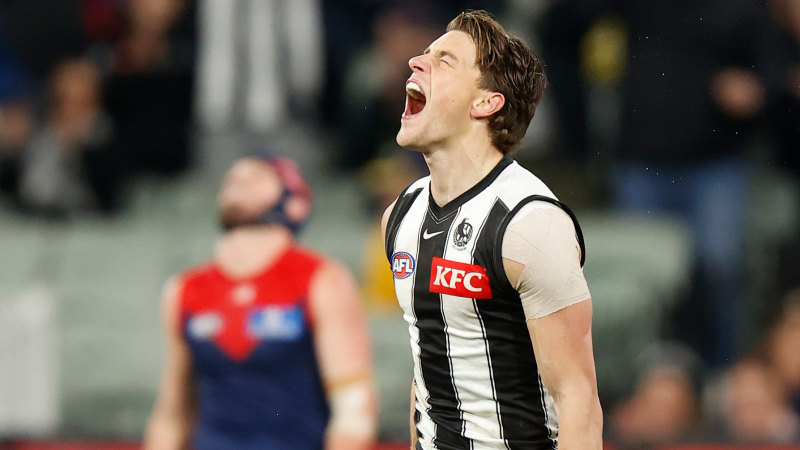 They did it again. Collingwood won their 11th game in a row and their 10th this season by less than two goals when they fought back from four goals behind to win the balance of five last-quarter lead changes and overcome reigning premier Melbourne in an MCG beauty on Friday night.

More than 70,000 watched on, shouting their lungs out and scarcely daring to breathe at the same time.

The win all but guarantees the Magpies a top two finish in what has turned into an extraordinary debut season for coach Craig McRae. This victory was in many ways the most meritorious, since the Magpies looked likely to be overwhelmed at times in the game and played hurt through the last quarter, cornerstone players Brayden Maynard and Nick Daicos both suffering. Courage has become this team’s badge, physically and in the way they move the ball. 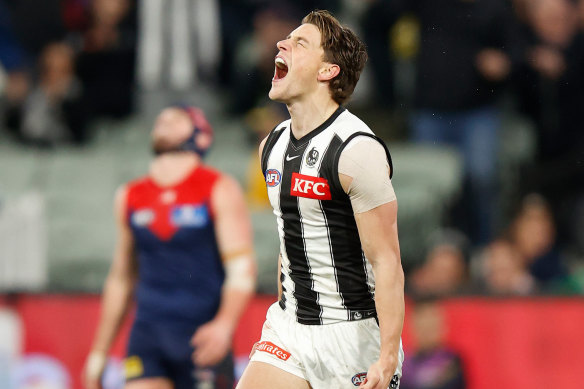 Second versus third on the ladder, old, old rivals, in an almost dry run for the finals: how lucky are the AFL with distractions when they need them.

Statistically and morally, this was David and Goliath. With 25 more inside 50s and nearly 100 more possessions, Melbourne will wonder how they lost this game. A lot of teams have found themselves scratching their heads after playing the Pies this season.

The first quarter confounded expectations. Moist surface and immense pressure notwithstanding, both teams kicked for goal often and straight.

In a spectacle well-known to Melbourne fans this year, they dominated the centre clearances, of which there were 12, and threatened to boss the game. Jack Viney led the way for the second week in a row. Midway through, Max Gawn had a simple shot to put the Demons three goals in front, but missed.

In a development well-known to Collingwood fans this year, they rebounded efficiently to stay in touch. Jordan De Goey put his stamp on the stoppages to keep the Pies in the contest. He would be superb all night.

In the second quarter, it was the same but doubly so. Melbourne had the first nine inside 50s and reigned 23-7 across the quarter in this category. A crude, flat-footed, knees-up attack by Mason Cox on Gawn in a marking duel seemed to give Gawn both the moral ascendancy and a spur. He controlled the ruck thenceforth. 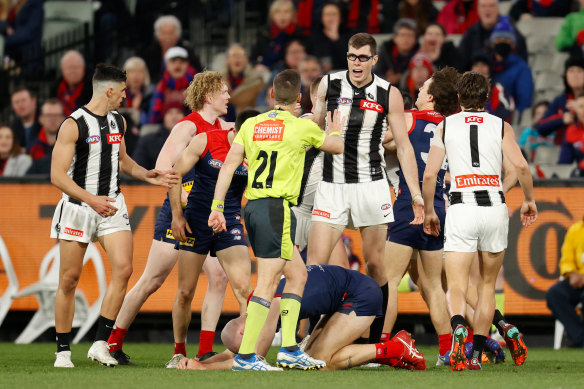 The aftermath: Max Gawn on the turf.Credit:AFL Photos

But the Magpies took their few opportunities. Eliott’s three first-half goals underscored his class. Though superior all over the ground, the Dees increased their advantage by only nine points.

The third quarter was rinse-and-repeat. Melbourne had the first five inside 50s, but the Pies ran the ball coast-to-coast to Beau McCreery for the first goal. Collingwood’s fanatical tackling pressure became the fulcrum. They laid more than 20 in this quarter alone, forcing the Dees to handball twice as often as they kicked. The pattern repeated. At three-quarter time, Melbourne had doubled Collingwood for inside 50s, but led by merely seven points.

It’s not that Melbourne buckled under the Magpies’ ferocity. But they did their fluency, and in the meantime Collingwood’s confidence grew. Another brilliant Maynard tackle turned into an Ash Johnson goal and a lead for the Pies, the first of five exchanges in the last quarter.

But the terms had changed now. Collingwood ruled the last half-hour of the match. Elliott kicked a fourth goal to celebrate his hard-earned 150. Ash Johnson, in just his fourth match, kicked four of his own. Clayton Oliver did the job of three men to try to wrest the game back for the Dees, but he could not do it alone. A goal in front with five minutes to play, the Magpies buried the ball in stoppages. Their winning spell goes on, and so does the spell they have weaved over the competition.

August 5, 2022 Rugby League Comments Off on Magpies do it again in a Friday night MCG beauty
NFL News