Unless his seven-month-old boy Oscar needs him, Tom Liberatore will be fast asleep at 2.20am on Sunday when his beloved Leeds United return to the English Premier League for the first time in 16 years.

Not everyone believes he will resist the temptation to watch his mob play Liverpool but with a huge match against Hawthorn ahead for the Western Bulldogs on Sunday afternoon, the maturing premiership midfielder has a plan.

"I obviously won't stay up the whole night like some people said [I would]. I will flick the phone off and watch it in the morning," Liberatore said. 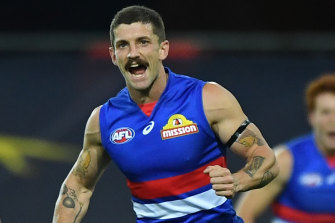 Tom Liberatore won’t stay up to watch his beloved Leeds face Liverpool in the Premier League on Sunday. Credit:Getty Images

His following of last season's Championship winners began as a child when he was watching soccer highlights on SBS with his dad Tony, the Footscray champion and Brownlow medallist, and Australian-born Leeds United pair Mark Viduka and Harry Kewell were kicking around.

"Dad explained that Viduka was from the western suburbs and [Dad] has a bit of a chip on his shoulder coming from being a little man," Liberatore said.

"He was like, I have to follow him, given he is a western suburbs boy, even though we were sitting into a two-storey house in Essendon."

Liberatore's laconic humour is never far from surfacing but he is also serious minded when he needs to be as he and his partner Malia raise five-year-old Lotus and Oscar on the Gold Coast during a dislocated winter and spring.

The pair met when living next door to each other in Footscray and many observe that the 28-year-old has settled since, his lust for life undiminished but his energies more thoughtfully directed.

Up north, he has had a crack at surfing, although he claims he has had no success in mastering the waves, and he is also studying social work at RMIT part-time.

In a glimpse of his nature, the tattooed Bulldog reluctantly admitted he buys the odd coffee for a homeless person when back in Melbourne if the chance arises although he is a realist when it comes to the impact of such gestures.

"I'm not sure whether they are that fussed about food or coin or that. I just chat," Liberatore said.

Such contact with those outside the bubble has been limited due to AFL protocols in 2020 but Liberatore has enjoyed the simplicity of a year in closer proximity to his immediate family and teammates.

"Maybe I am just happy to be playing again," Liberatore said.

Becoming a father has taken the edge of winning and losing games of football but it's clear it hasn't dulled his desire to compete, nor his unconventional outlook.

Unlike the narrator in the Rolling Stones' classic Sympathy for the Devil, there is nothing puzzling about the nature of Liberatore's game. He repeatedly wins footballs in dispute and dishes off the prize to teammates like a bricklayer throws bricks.

He has been a warrior this season playing off short breaks despite the ongoing attention his grumbling knee requires and has been among the Bulldogs' best as they charge towards finals late for the second season in succession.

Liberatore is critical to their chances as he strolls from contest to contest to make his presence felt, sometimes standing at the edges of a stoppage like he's waiting for a coffee before exploding into action to win the football.

"We've got a few things to tidy up, just around the quality aspect of our ball use and our composure," Liberatore said.

That Liberatore remains a key part of the equation is testament to his resilience, overcoming injury and managing to balance his loyalty to those people closest to him outside of football with what the club needed for him to perform as an elite professional athlete.

"It's just constantly learning from experience. I have always had the basic foundation," Liberatore said.

"You take a lot from your teammates and learn a lot of stuff off blokes leading from example and even my best mates and family too. They are probably the main reason you strike a good balance."

He's a treasure Liberatore, the mischievous moustached left-footer with a family, a sometimes sore knee and a questing mind, who is hoping for a Leeds United and Bulldogs quinella on Sunday.

September 12, 2020 Rugby League Comments Off on ‘Libba’ makes himself at home away from the kennel
NFL News